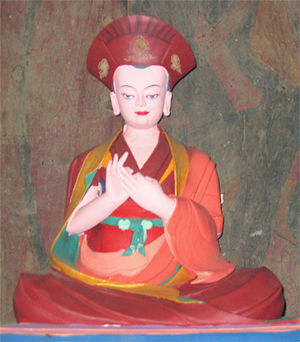 An outstanding master of several traditions, most commonly remembered today as a Drikung Kagyu master. His biography suggests that he was among the most important disciples of the 5th Karmapa Deshin Shegpa, if not even his main student. However, he is virtually unknown in the present-day Karma Kagyu tradition. He was born in Kham/Eastern Tibet in 1372 and grew up under the care of an aunt of his. The family was close to several Bonpo masters and so he at first received some of their instructions and practiced a little accordingly. At age nine an uncle of his, Du dben sha dKon mchog bzang po, encouraged him to take responsibility for certain worldly affairs and educated him to become his personal assistant. Ten years later, the young man traveled to Central Tibet and took on a position as a lay-official in Drikung. He married a local princess and fathered a daughter. However, on a journey undertaken with a friend, that friend died unexpectedly.

Having thus been confronted with the simple truth of death and impermanence, he gave rise to the strong wish to emulate the Lord of Yogins, Jetsun Milarepa. He requested and received teachings and empowerments and strongly wished to immerse himself fully in contemplation. Against strong resistance from his family he left all worldly ties behind and received ordination in Drikung at age twenty-five. After three further years there, for the purpose of familiarizing himself with the dharma to such an extent that he could safely wander off into mountain wildernesses in order to practice, he went for his first long retreat in Lapchi, which lasted six years. While there he at first underwent tremendous difficulties, but is also known for performing various miraculous deeds later on, such as diverting a snow-avalanche, sitting in a blazing fire while remaining unharmed or frequently meeting and conversing with protective deities such as the Five Sisters of Long Life, who have been associated with Lapchi since Milarepa's time and who's main residence, the mountain known as Thon Thing Gyalmo, is not far from there.

But even while realizations began to unfold almost effortlessly, he retained a very self-deprecating humour. One episode from his biography is particularly telling. He was in closed retreat in a cave in Lapchi and was very low on supplies. It had snowed a lot and there was little prospect for replenishing supplies any time soon. Accordingly he lived on just a few spoons of tsampa mixed with water per day. One day his tsampa tasted so good, that he had another bowl, and another, etc. He ate so much that the supply for a whole month was soon used up and his stomach felt like a leather bag filled almost to bursting. He then thought to himself, "Today I have brought great shame upon the yogins of our Kagyupa tradition! If I were to die now, as a result of my overeating, it would be said everywhere that a yogin who suffered from the lack of food has died of the results of gluttony. What irony!"

After a yearlong break, during which he visited several of his teachers for further instructions, and a several months long stay at Samten Ling, near the sacred site of Gyalkyi Shri in the Tsibri region, he returned to Lapchi for eight further years of solitude. Afterwards, having been advised so by the 5th Karmapa Deshin Shegpa, he went to Dagla Gampo for eight years, where he did further retreats and guided many practitioners. Lapchiwa Namkha Gyaltsen then returned to Lapchi where he stayed for the remainder of his years, until his passing away in 1437. He had become a lineage holder of the Sakya, Karma Kagyu, Drikung Kagyu and Shangpa Kagyu traditions and also held the lineage of the Oral Tradition of Rechungpa. He met many of the greatest master of his time, including the Mahasiddha Thangtong Gyalpo, who visited him in Lapchi itself. This event is not mentioned in Namkha Gyaltsen's biography, but in Thangtong Gyalpo's, where it says that the Mahasiddha saw the Lapchiwa as a sphere of light and the Lapchiwa saw him as Guru Dragpo. It also informs us that they compared their understanding of the Doctrines of Naropa and Niguma. (dpal grub pa'i dbang phyug brtson 'grus bzang po'i rnam par thar pa kun gsal nor bu'i me long; by Lochen Gyurme Dechen, pp. 92b/5, 184/5: "de nas la phyi la byon/ chos rje 'bri gung pa nam mkha' rgyal mtshan dang 'jal/ nA ro ni gu phar 'chad tshur 'chad mdzad/ grub thob chen pos chos rje 'bri gung pa 'od kyi phung por gzigs/ 'bri gung pas/ lcags zam pa/ gu ru drag po rtsal du gzigs so/")

Namkha Gyaltsen earned the title of "Lapchiwa" because he spent more time in the sacred place of Lapchi than anyone before or after him. All in all he spent 31 years there and also passed away there. After his first retreat at Lapchi, in the Prophesied Cave of the Great Forest, he frequented various of the other caves of Milarepa there. Near the Crest Cave, which the highest of the meditation caves there, are the remains of a simple stone-throne from which the Lapchiwa taught his many students. His relic stupa remains in Lapchi to the present day and is kept in one of the larger caves there, the Rechen Cave, which was the assembly place for hermits until Shabkar Tsogdruk Rangdrol came in the 1830's and built a small temple and monks quarters at the foot of the mountain. This small monastery, Chöra Gephel Ling, has been renovated several times and exists to the present day.


My full translation of the Lapchiwa's biography has very recently been published under the title "A Garland of Immaculate Moons - The Biography of Lapchiwa Namkha Gyaltsen, a Mind Emanation of Jetsün Milarepa," by the Edition Garchen Stiftung, ISBN 978-3-945457-06-1.