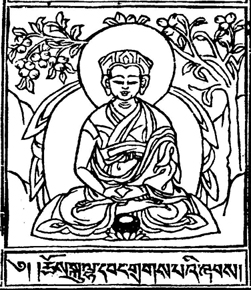 Lama Dampa Jampa Lhündrub Drubpa'i Wangchug Lhawang Dragpa (bla ma dam pa byams pa lhun grub grub pa'i dbang phyug lha dbang grags pa), as Tāranātha calls him, aka Dragtöpa Lhawang Dragpa, was born in Tö, Western Tibet. At first he received training in the Upper Drukpa Kagyu tradition as well as in the Oral Tradition of Rechungpa. He also received the teachings of the Nyingma school. Later, after he had met with Jetsün Kunga Drölchog and attended upon him, he received the transmissions and teachings of the Jonang and Sakya schools. All of these teachings etc. he received in their entirety, with nothing whatsoever left out. Most importantly however, he received from Kunga Drölchog the complete transmission of the teachings and practices of the Shangpa Kagyu, which were closest to his heart. Putting these teachings into practice, he truly erected the victory banner of accomplishment. Experiences and realisations were overflowing from within, and he fully mastered the practices of channels and subtle energies. He attained the deathless vajra-body and lived for more than 120 years. Where the Sakya, Kagyu, Jonang and Shangpa traditions are concerned, he had many students who came to study and practice these under him. In particular, he passed on the Shangpa tradition in its entirety into the hands of its owner, the All-knowing Jetsün Jonang Tāranātha, and invested him with the responsibility of its continuation. Shortly after this, he passed away into other realms. The majority of his precious remains were enshrined in a golden reliquary in Dragtö called Tashi Öbar. For as long as it remains as a support for the offerings of beings, it will be a cause for their rebirth in the pure realms.
Chöku Lhawang Dragpa later incarnated as one of the masters of Drog-ge monastery (jo nang 'brog dge dgon nges don bsam 'grub gling), which is to the present day one of the largest and most important Jonangpa monasteries in Amdo.