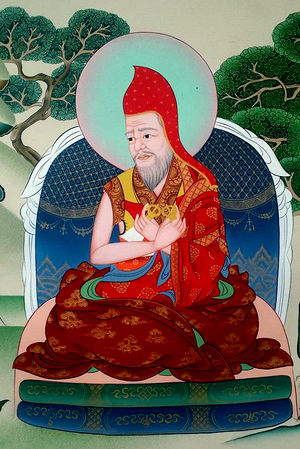 Benchen Lama Samten's incarnation, who would become known as the Drongpa Lama Tendzin Chögyal of Benchen, was found according to the indications of the 14th Karmapa Tegchog Dorje. The 8th Sangye Nyenpa had traveled to Tsurphu, the Karmapa's seat in Central Tibet, and received clear indications from the Karmapa that Lama Samten had been reborn as the son of Norbu Gyaltsen, a chieftain of the Upper Drong area. When Sangye Nyenpa returned to Kham, he traveled through the Drong area and was invited by various local chieftains to perform ceremonies on their behalf. In the house of said Norbu Gyaltsen he was eventually approached by a seven year old boy who asked Sangye Nyenpa to return his thigh-bone trumpet to him. Sangye Nyenpa talked to the boy's father and asked him to send the boy to Benchen after a few years. The father happily agreed and sent him there when he was thirteen years old, together with his older brother Tsewang.


Once arrived in Benchen, he received novice ordination from Sangye Nyenpa and his name, Karma Tendzin Chögyal. He soon began to study all the teachings, practices, arts and crafts of the Karma Kagyu tradition and excelled in all of them. At age seventeen Sangye Nyenpa sent him to further his studies and practice under the guidance of the Great Jamgön Kongtrul Lodrö Thaye at his seat, the hermitage of Tsadra Rinchen Drak above the great Palpung monastery of the Situ Rinpoches in Derge. Jamgön Kongtrul took him in lovingly and soon gave him the nickname Gawa Tulku, refering to the area of Ga in Nangchen in which Benchen monastery is situated. From Kongtrul he received the maturing empowerments and liberating instructions of both the Karma Kagyu and Shangpa Kagyu traditions in their entirety. He then proceeded to perform the traditional three-year three-fortnight retreat under Kongtrul's guidance, in which he excelled. After this retreat, he stayed on as Kongtrul's personal attendant for three further years. When Jamgön Rinpoche was obliged to travel to Central Tibet, he left Tendzin Chögyal in charge of all the affairs of Tsadra. He said to him: "Gawa Tulku, you be my representatve! You also be the retreat master! And you also be the manager! You also be the servant and will look after the estate, the house and everything!" With that he left for U-Tsang. Heeding every word of his revered master, he was able to return the entire estate in perfect condition when Kongtrul came back after several years.


When the 15th Karmapa Kakhyab Dorje came to Palpung, Tendzin Chögyal was fortunate to receive the transmissions of both Kagyu Ngagdzö and Dam Ngagdzö in his presence, from Jamgön Lodrö Thaye himself. Upon both Jamgön Kongtrul's and Jamyang Khyentse Wangpo's insistence, Tendzin Chögyal was also able to assist with the finding and recognition of the 10th Tai Situpa Pema Künsang. They brought the young incarnation back to Palpung, thus pleasing everybody greatly. After an absence of almost ten years from his own Benchen monastery, and also because Sangye Nyenpa Rinpoche had now become very old, Tendzin Chögyal eventually asked Jamgön Rinpoche's permission to return to Benchen. Jamgön Rinpoche was delighted at Tendzin Chögyal's intention to help and further the activities at Benchen monastery and gave his permission wholeheartedly. As parting gifts he presented Tendzin Chögyal with an old panditas hat of his, a chod drum with little bells and paintings on its sides, a statue of Guru Mahasukha from one of his own termas, and a small thangka of the Six-armed Swift-acting Awareness-protector with a handprint of himself on the back, into which the awareness aspect of Six-armed Mahakala had truly dissolved.


Upon parting, Kongtrul advised Tendzin Chögyal to always maintain the three kinds of commitments, to never forget the inseparability of emptiness and compassion, and to always remember and supplicate the lama. With that Tendzin Chögyal left. Ariving back in Benchen after his prolonged absence, Sangye Nyenpa was delighted to have him back and right away established him as one of Benchen's great masters, with a house, an estate and his own throne in the assembly hall. He said: "Since your homeland is Drong, let this be known from now on as the Drongpa Labrang!" Immediately faithful people began to present lots of offerings. But Tendzin Chögyal didn't keep anything for himself. He proceeded to establish a retreat centre for the teachings and practices of the Shangpa Kagyu right away. It was built on a spot behind and above the main monastery that resembles Tsadra. He also established three further retreat centres around the monastery, each of which had rooms for five retreatants, a retreat master and an attendant who also doubled as the cook.


Right away he began his vast activity as a teacher and gave empowerments, reading transmissions and instructions to an ever growing number of students, both from Benchen and other places. He also established funds for the regular performance of the elaborate seven-day rituals of Kalacakra, Hevajra and Tarayogini. After Sangye Nyenpa had passed away, Tendzin Chögyal traveled all the way to Tshurphu in Central Tibet, the seat of the Karmapas, and asked Kakhyab Dorje's advice about how and where to find the precious rebirth of Sangye Nyenpa. The Karmapa was positive the Sangye Nyenpa had already been reborn and gave a clear prediction as to where and how to find him. The tulku, the 9th Sangye Nyenpa Rinpoche, had been born into the Dilgo family in Kham and was recognized and enthroned accordingly. However, Sangye Nyenpa's father wished him stay at the Dilgo estate for a few more years, so Tendzin Chögyal was asked to come there for a while to act as the new incarnation's tutor.


In that regard there is an interesting passage in Dilgo Khyentse Rinpoche's autobiography (Brilliant Moon - The Autobiography of Dilgo Khyentse; Shambhala, 2008), who was Sangye Nyenpa's younger brother. He says there: "A close disciple of Jamgön Kongtrul's, named Drongpa Lama Tendzin Chögyal, was the tutor of my elder brother, Choktrul Sangye Nyenpa. Once when he was staying at our home doing a week's drubchen of the Dharma Lord Ratna Lingpa's Secret Assembly Longevity Practice, my parents, siblings and I all had the privilege of receiving the essential empowerment. That was the first empowerment I received in this body, and I think it may have been due to this initial auspicious coincidence that I lived longer than the rest of the Dilgo family." Tendzin Chögyal spent more than a year in the Dilgo family's house.


When Sangye Nyenpa finally came to stay in Benchen, Tendzin Chögyal was instrumental in his upbringing and education and passed on to him all the empowerments, reading transmissions and instructions of the Karma Kagyu school. Once, while traveling and performing rituals on the behalf of others, Tendzin Chögyal dreamed of his guru Jamgön Kongtrul. In his dream he received precious advice from him and two empowerments which he had requested before, but which Jamgön Kongtrul had been unable to give at the time. A few days later he received the sad news of the passing of his guru and performed very extensive offering rituals in his memory.


Tendzin Chögyal himself lived for some more years and was very active for the benefit of others, always giving empowerments and reading transmissions, instructions for practitioners and performing rituals on behalf of both the living and the deceased. All the while he was abroad, his brother Tsulga and a nephew named Gönpo Tobgyal managed his estate at Benchen. His nephew eventually married Rigdzin Drölma of the Gegyal Barma family clan. They were to become the parents of Tendzin Chögyal's future rebirth, the present-day Benchen Tenga Rinpoche. One winter Tendzin Chögyal became very ill. He again dreamed of his guru Jamgön Kongtrul, whom he saw as sitting upon a high lion-throne, wearing the three dharma-robes and looking very magnificent. In his dream Jamgön Kongtrul said to him: "Now the time has come to join me in the pure realm of the lama." Jamgön Rinpoche then uttered this aspiration:


"I supplicate the Three Jewels and Three Roots,
And especially all the glorious Lamas!
Bless me that no thoughts of non-virtue
Arise in my mind and that it may turn towards the Dharma!


May I understand that all happy and unhappy acts
Are impermanent and dream-like,.
When I die, may I take rebirth in the western paradise
Of Sukhavati and attain the irreversible state!"


Tendzin Chögyal then said to his attendant to make and keep a list of all the things he had done, and told him that he was about to depart to some other lands for a while. Three days later he passed away. His remains were then brought to Benchen and cremated in a magnificent ceremony. Even just a single bone, which was extracted from the funeral hearth by Khenpo Söpa Tharchin, produced lots of the small relics known as "ring sel." The remaining relics were enshrined in a copper and gold stupa, together with the hat and terma statue that Jamgön Kongtrul Rinpoche had given him. Tendzin Chögyal had had many exceptional students, first and foremost among them of course the 9th Sangye Nyenpa Rinpoche. Others were the Benchen Khenpos Karma Guru and Söpa Tharchin, who became the retreat master of the Jinasagara retreat centre; Karma Gyalwe Wangpo who practiced mainly Vajravarahi and Könchog Chidü and accomplished a hundred million Guru Rinpoche mantras; Rinchen Palden who practiced mainly Vajrakila of Ratna Lingpa's revelations and became the retreat master of the Sarvavid Vairocana retreat centre; Khenpo Karde who lived with no fixed abode and eventually went to Tshurphu and served the Karmapa; and Trom Sangpo Lodrö, who practiced only the Six Doctrines of Niguma and could transform his dreams, thus traveling to many pure realms. He became the retreat master of the Shangpa Kagyu retreat centre. There were many others.