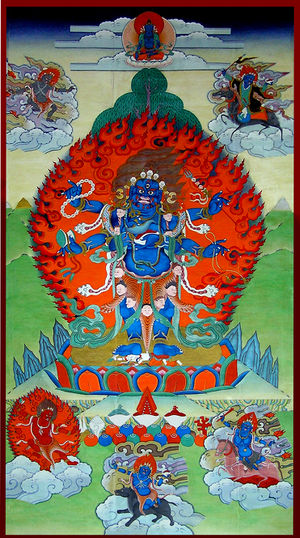 The Swift-acting Six-armed Awareness Protector, the special protector of the Shangpa Kagyu tradition and its followers, commonly known as the Six-armed Mahakala, a wrathful emanation of the Great Compassionate One, Arya Avalokiteshvara, a dharmapala whose transmission originated with the Indian Mahasiddha Shavaripa. There also is a rare transmission of the protector with three faces which comes from the Mahasiddha Saraha. These transmissions were received by Khedrub Khyungpo Naljor, both in India and Tibet, from his teachers Maitripa and Rahula. The Six-armed Protector is the special protector of the Shangpa Kagyu tradition and its practitioners to the present day. Ever since the incomparable Tsongkhapa Lobsang Dragpa received these transmissions from Jagchen Jampa Pal, the Six-armed Protector is also one of the main protective deities of the Gelugpa school. There are also other lineages of Six-armed Mahakala practice, but they all go back to Khyungpo Naljor's original introduction of this cycle of empowerments, teachings and practices into Tibet. The sole exception is the Six-armed Mahakala treasure teaching revealed by Chokgyur Dechen Lingpa and included in his collected terma treasures, the Chokling Tersar.


Concerning the various lineages of Six-armed Mahakala transmission as they developed in Tibet, Jamgon Kongtrul writes in his "Introduction to the Shangpa Kagyu" in his "shes bya kun khyab mdzod": "For instance, if we were to look just at the cycle of teachings on the Swift-Acting Awareness-Protector alone, in times past it was the upper lineage transmission which was predominant. In later times, the lower tradition, the lineage of Rigongpa Chökyi Sherab, spread far and wide. It was passed down from his lineage holders and suffused the Phagdru Kagyu, the Karma Kagyu and the four congregations. From Samdingpa Khetsün Shönu Drub it was disseminated to all the upholders of the southern Chod tradition. From Jagpa Gyaltsen Bum it spread further in three branches, called the upper, lower and middle. Especially the Lord Tsongkhapa received these transmissions from Jagchen Jampa Pal. The learned and accomplished Geleg Palzangpo received them from Müchen Namkhe Naljor. Eventually these teaching cycles spread throughout Tibet's east and west, as well as China and Mongolia."


And in his "The Lapislazuli-Key, completely (or clearly) revealing the Contents of the Precious Treasury of the Golden Doctrines of the Glorious Shangpa Kagyu" Kongtrul writes: "Khedrub Khyungpo Naljor received countless teachings on this protector's cycle from such masters as the lords Maitripa, Rahulagupta, and Pandita Rolpe Dorje, and he gave it in many different ways to most of his students, including the master Chökyi Sherab. Thus, this protector became the one and only protector of the teachings for all Shangpa lineage holders and countless traditions developed. There are however two main traditions, the upper and lower. The upper, or Nenying tradition (gnas rnying lugs), is a lineage from (Latöpa) Könchog Kar. The lineage Kyergangpa Chökyi Senge received from both Mokchokpa Rinchen Tsondrü and Togden Zhang-gom Chöseng is known as the lower, or Rigong, tradition. In the latter, a lineage from the master of the monastic seat, Master A’i Senge, spread in the Phagdru Kagyu tradition; a special tradition of three lineages - upper, lower, and intermediate - from the learned and accomplished master Jakpa spread to the Gelug and other systems; and (the same three) from the learned and accomplished master Samdingpa spread to the southern Chod lineage. Thus, this protector’s practice has limitless numbers of traditions and has a very extensive enumeration of teachings."


The Six-armed Mahakala comes with a retinue of five main deities, plus another seventy-five retinue figures altogether. The immediate retinue of five, most often depicted on thangkas, are first a form of Shri Devi called Remati. She can appear in one of three different forms. Two of them are two-armed, one is a four-armed form. She is considered the consort of Six-armed Mahakala even though they are usually not depicted as in union. The other four deities of the immediate retinue are Kshetrapala, Dzinamitra, Takkiraja and Trakshe. Each of these five have their own retinues in turn. The seventy-five deities of the further retinue then come in groups. They are the ten protectors of the corresponding directions, the eight great gods, the eight great nagas, the eight great planets, the twenty-eight goddesses of the lunar mansions, the nine bhairavas and the four great kings. They are then further surrounded by various classes of beings and spirits who make up the individual retinues of those aforementioned deities and are said to number in the many thousands.


The most well-known variant form of the protector is the so-called "mgon dkar yid bzhin nor bu" or "White Protector Wish-fulfilling Jewel" who is often, erroneously, taken to be a different deity. There are also yellow, red, green and maroon forms of the protector, as well as the protector with various configurations of retinue figures and with a consort as well as without. In the upper lineage transmission there even once existed a practice of a eleven-faced and thousand-armed form of the protector with a consort, much like his peaceful counterpart, the eleven-faced and thousand-armed Avalokiteshvara. But this tradition has been lost a long time ago. Jetsün Tāranātha has composed various brief, medium length and extensive practice manuals for these various forms. They can be found among the collections of Shangpa Kagyu texts as well as in Tāranātha's famous "sgrub thabs rin 'byung brgya rtsa," a large collection of sadhanas in two volumes, which can be viewed as something of a precursor, and possibly the inspiration, for Jamyang Khyentse Wangpo's and Jamyang Loter Wangpo's famous "sgrub thabs kun btus" collection.


While there were and are certainly many temples and sacred sites in Tibet, dedicated to the Six-armed Mahakala, one of them was more sacred than all others. It was the protector temple and statue of the Six-armed Mahakala that was constructed by Rigongpa Chökyi Sherab (1175-1247), aka Sangye Nyentön and Nyentön Chöje. After Shri Devi Remati had repeatedly urged him to construct such a statue, he began to gather a large amount of clay for the project. However, he was apparently not a particularly skilled sculptor and thus the clay just sat there for a while. One day a dark-skinned yogin appeared out of nowhere in particular and asked Rigongpa what he intended to do with all that clay. He was duly informed that it was intended for a statue of the Six-armed Mahakala. Rigongpa in turn asked the yogin whether he was any good working with clay and might be willing to help with the task. The yogin replied that he had some ability in that area and immediately began to fashion a most amazing likeness of the protector. Then the time came to paint the statue and the yogin asked Rigongpa whether or not he had all the necessary colours. Rigongpa had already collected them and produced them immediately. The yogin then proceeded to mix all the colours together and drank them. Then he spat them out again, upon the statue, and miraculously all the right colours went where they were supposed to go and the painting was thus accomplished in the most perfect way. By now it was more than apparent that this yogin was not an ordinary person. When Rigongpa asked him whether or not he was also skilled in the art of consecrating the statue, the yogin just dissolved into the statue without another word. It was now clear that this yogin was nothing other than an emanation of the protector himself. While it is said that the blessings and inspiration of the protector are generally more efficient when kept secret, this statue was accessible to all and carried great blessings. Many masters visited it over the centuries and commented upon its strong blessing. The present Dalai Lama, while living in Tibet, had a special gold smith in Lhasa fashion the implements of the protector from pure gold every year and had them offered to the statue. When the previous Kalu Rinpoche visited there in the 1950s, he insisted upon the statue being all golden, while his attendants always protested and said that they saw it as dark blue. Thus this a place open to all.


There are various other places associated with this protector which are less accessible and some which are even outright off limits to those who are not familiar with the protector's practices. One such site is the "Secret Protector Cave" described by Jamgon Kongtrul in his guide to the greater pilgrimage area surrounding his hermitage at Tsadra Rinchen Drak and Palpung monastery. "There," he says, "lies the protector's secret cave. Ordinary persons are not permitted to enter. Those who practice the meditations of the Six-armed protector may enter with great caution and present offerings, praises and supplications. Their hopes and wishes will be fulfilled."


Another special image of the Six-armed Mahakala is one unearthed as a treasure by Chokgyur Dechen Lingpa and given to Jamgon Kongtrul. It is an image carved from a black stone from the Sitavana or Cool Grove charnel ground near Bodhgaya by none other than Nagarjuna himself, known as "Blazing Fire" (me 'bar ma). Guru Padmasambhava brought it to Tibet and concealed it as a treasure at his Yelphuk Cave hermitage (yel phug nam mkha' mdzod). According to Chokling this image, brought to Tibet almost a millennium before Kongtrul's birth, was meant for him all along. This image, which has survived the upheavals in Tibet and carries extraordinary blessings, is in the possession of the present 4th incarnation of Jamgon Kongtrul.