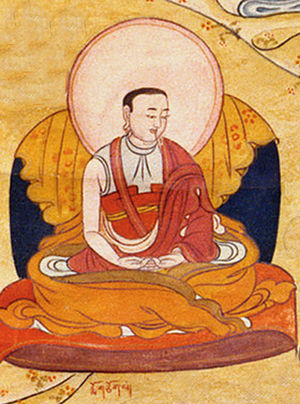 Mokchokpa Rinchen Tsondrü (1110-1170?) was born in the grasslands of Lhabu, in the Shang Valley of Namling County in Western Tibet. He begins his autobiography by informing us that he entered through the doors of the dharma at age sixteen or seventeen. Then he goes on to say that he spent about one year studying the monastic codes of conduct, the Vinaya. While he does not inform us clearly about whether he took monastic ordination or not, there simply is no definite proof for the assertion that he was a layman. We have rather more reason to believe the former, since he writes that Khyungpo Naljor repeatedly addressed him as "young monk" on several occasions, and his prolonged studies of the Vinaya would also rather point in the monastic direction. However, in the absence of a clear statement we can not be sure. In his youth, he studied many texts, including the Prajnaparamita. He received both maturing and liberating teachings from Lama Burgom Nakpo, a disciple of the lord Rechungpa and spent five years with him. Khyungpo Naljor told him that during a dream Amithabha Buddha told him to give him the instructions of the Shangpa one-to-one guru to disciple transmission and Mokchokpa received all the Shangpa teachings and became the Shangpa lineage holder. He also studied and practiced under Khampa Aseng, who was a teacher of the 1st Karmapa Düsum Khyenpa. After Khyungpo Naljor's death, he spent two years in solitary meditation. He developed experiences and realization of Illusory Form, Dream Yoga and Clear Light. He met Gampopa to clarify his doubts with his practice and received all the Mahamudra teachings and instructions. They had a very emotional meeting, clearly recognizing each other as having been teacher and student to each other for many lifetimes. Mokchokpa had complete understanding of the Mahamudra precepts. Mokchokpa stayed meditating in a mountain cave in the Mokchok area for twelve years and spent seven or eight of these years training exclusively in the “Combined Accomplishment of the Four Deities” (lha bzhi dril grub), one of the core practices of the Shangpa tradition. During that time he had many visions that he would built a monastery in Mokchok and gathered many disciples. As Mokchokpa lay dying he sang a song to his disciples and said: "After this life I will go to the Eastern pure Land of Joy, Called Light Brilliance where I will attain enlightenment, and turn the wheel of Dharma. The Shangpa lineage will be continued by the great Wonton Kyergangpa, himself an emanation of Avalokiteshvara. He will have a disciple of great renown, Sangye Nyenton Rigongpa, whose disciple will in turn continue the transmission and protect this lineage."

When the previous Kalu Rinpoche was in Lhasa in the 1950's, he dreamed of a very special child which he strongly considered an incarnation of Mokchokpa. This was later confirmed both by H.H. the 16th Karmapa and the then regent of Tibet. The child was eventually enthroned and began his education. He presently resides in France (see link below).