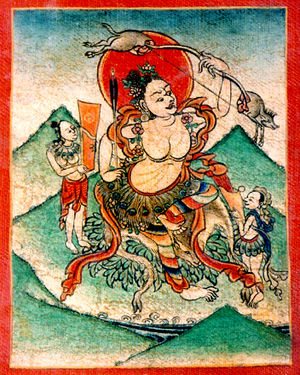 Shavaripa was an Indian Mahasiddha who figures prominently in the early lineage of the Mahamudra transmission. Nothing much is known about him. Apparently he was a hunter who was dissuaded from his evil livelihood by Avalokiteshvara himself. The Bodhisattva appeared to him and boasted of being the better hunter of the two. He challenged Shavaripa to a competition and said he could kill 100 animals (which were his own emanations) by shooting a single arrow, which he proceeded to do. Shavaripa could not compete. Avalokiteshvara then showed Shavaripa the hell reamls in which he would be reborn in the future. Terrified, Shavaripa abandoned hunting altogether.
He later met the Mahasiddha Saraha and the incomparable Nagarjuna, from whom he received Mahamudra instructions. He practiced these and attained complete realization. Shavaripa then passed these instructions on to his disciple Maitripa, who passed them on to the Tibetan translator Marpa. He was also an important early lineage master in the transmission of the practices of the Six-armed Mahakala which were then passed from Maitripa to Khedrub Khyungpo Naljor, the founder of the Shangpa Kagyu tradition. Another special transmission of his is that of the Six Yogas of the Kālacakra tradition, the so-called "Six-limbed Vajra Yoga" or simply "Six Vajra Yogas" (Skt. ṣaḍañga-yoga). Over the centuries he appeared at crucial times to various masters and transmitted these teachings to them.

A Supplication to the Mahasiddha Shavaripa

Om Svasti!
In the cloudless pure expanse of space,
In an unconstructed immeasurable tent-like pavilion of rainbow-light,
Is glorious Shavaripa with a ruby face;
I pray increase qualities without fault!


Wearing a garment of the skin of a young deer,
Short and corpulent and adorned with jewels and bone-ornaments,
You revel in aspects of dance in the loosely crosslegged position;
To you with wrathfully smiling face I pray!


Ornamented with a garland of Danukara flowers,
In you right hand you carry the small horn of a bamen deer,
In your left a human thighbone with piercing sound;
Mountain-dwelling yogin, at your feet I supplicate!


The dakas of the three places dance in formation,
Dakinis sing sacred songs with roaring voices,
Proclaiming various dharmas with jingling sound;
Glorious hermit, at your feet I supplicate!


By the strength of praising you - the lord of hermits,
May all the clouds of the two habitual obscurations,
Be completely blown away by the fresh breeze of non-thought,
Making visible the sky-like intrinsic nature!


While in Chölung, when beholding a vision of the Mahasiddha Shavaripa in the sky among rainbow-lights, the Omniscient Lord of the Dharma smilingly composed these words.