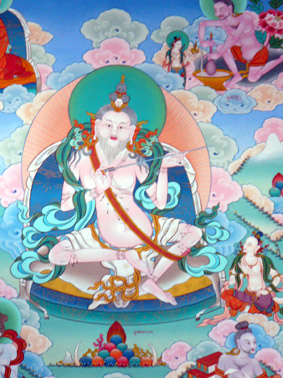 Saraha, Indian Mahasiddha and lineage master in the Mahamudra transmission. Also known as "The Great Brahmin". Historically he is certainly one of the most elusive figures in the transmission of the Mahamudra lineage. No definite dates are known for him. Saraha is counted among the Eighty-four Mahasiddhas of India and a brief biography of him can be found in the work of Abhayadatta. The "Dohakosa-Nama-Caryagiti" or doha mdzod spyod pa'i glu is attributed to him. Several of these songs are translated into English.
According to the famous historian, the 2nd Pawo Rinpoche Tsuglag Threngwa (1504-1566) in his history of the Dharma chos byung mkhas pa'i dga' ston, Saraha was born 360 years after the Buddhas's passing into Nirvana. He was born in a country called Vidharbha in the south, and was the youngest of five brothers. They all were very well versed in brahmanic lore. Saraha, having had great faith in the teachings of the Buddha, took ordination from the master Rahula and proceeded to become an exceptional scholar. One day, as he was walking in a forest, he came upon four brahmin girls who were celebrating a feast. Each of them offered him a skull cup full of alcohol after which he experienced the four kinds of joy. The girls then revealed themselves to be dakinis and granted him the four empowerments.
One of them then said, "This is your master!" and as he looked up into the sky, the Bodhisattva Ratnamati appeared, along with Hayagriva. From them he then received the transmission of the Mahamudra teachings.
He then proceeded to a market place where he came upon a woman making arrows. As soon as he saw her, all appearances took on a symbolic meaning. She also taught him Mahamudra and together they performed tantric practices. Once, as he was practicing with a consort in a forest, he asked her to boil him some radishes. Then he entered a deep meditative absorption from which he did not emerge for 12 years. When he emerged from this samadhi, he said, "Now we should go to a solitary place!" and then asked, "Where is my boiled radish?"
His consort answered, "If your mental desires are not yet cut off, taking your body to solitude will not help. What sort of meditation is that, that cannot even cut off the desire for radishes?" Then she told him how he had been meditating for the last 12 years. "Right!" he thought and proceeded to practice in various places with various consorts. He converted many critics of his lifestyle and non-buddhists with miracles and sang many songs of realisation. The most famous ones are the "Doha for the King", the "Doha for the Queens" and the "Doha for the People". Upon passing away, he did not leave a physical body behind but left for the realms of the dakinis.
"Doha" is the name for a certain type of songs and their specific meter that were in frequent use in ancient India. Employing these, Saraha thus founded a tradition of expressing spiritual realisation and instruction in this particular form of song, that was to be adopted by many masters and was to continue for many centuries.
A very well researched and superbly written work on Saraha has recently been published by Kurtis R. Schaeffer, "Dreaming the Great Brahmin: Tibetan Traditions of the Buddhist Poet-Saint Saraha", Oxford University Press Inc, USA, ISBN 0195173732. Also look at "A Song for the King: Saraha on Mahamudra Meditation" by Khenchen Thrangu Rinpoche and Michele Martin, Wisdom Publications, USA, ISBN 0861715039.