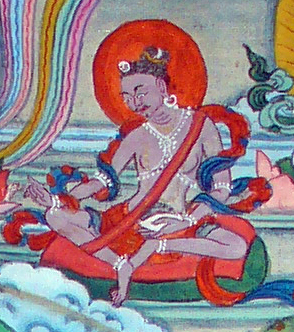 An Indian Mahasiddha who was a teacher to both the great Atisha as well as the founder of the Shangpa Kagyu school, Khedrub Khyungpo Naljor. He is also known by the nickname of "the Yogin of the Black Mountain". Rahula was born into a royal family in the southern town of Elabisha/Bhirajo. At birth, Avalokiteshvara, Tara, Vajrayogini and the Swift-Acting Awareness-Protector revealed their faces and blessed him. During his youth he became severely ill and developed sincere disillusionment and disgust with the ways of samsara. He thus entered upon the path of Buddhadharma and became very learned, especially in the tantras and treatises. His main teachers then were the masters Gunasagara and Ratnasagara, who provided him with precepts which allowed him to attain accomplishment easily. He thus attained the state of an awareness holder with control over the length of his life and eventually realized Mahamudra. Rahula miraculously flew to Tibet one day, and spent seven or, according to other sources, eleven months with Khyungpo Naljor, transmitting to him many teachings, especially on the Six-armed Mahakala and the Combined Accomplishment of the Four Deities, which is one of the most important core practices of the Shangpa Kagyu lineage. He is thus the only Indian teacher of Khyungpo Naljor's whom he did not meet in India itself but who actually sought him out in Tibet.

Another master by the same name is said to have given monastic ordination to the Mahasiddha Saraha. He cannot possibly be the same as the above mentioned one, as he must have lived much earlier. On the other hand, "Rahula" also seems to have been one of the names of Saraha himself. He is mentioned as such as a teacher of Nagarjuna. It seems clear however that he, and the above mentioned Rahula-gupta cannot be one and the same person.

Also, the name of the Buddha's son, which he fathered as Prince Siddharta, before he left his father's palace and eventually became Buddha Shakyamuni. He was born again much later and also became one of the teachers of Khedrub Khyungpo Naljor, though very little is known about him and he is usually, and aptly, referred to as the "Hidden Yogin Rahula" or "sbas pa'i rnal 'byor sgra gcan 'dzin pa". [TSD]