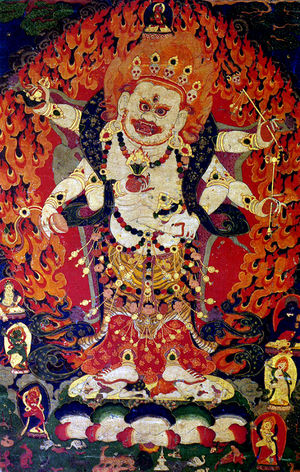 "mgon dkar yid bzhin nor bu", lit. the White Protector Wish-fulfilling Jewel, aka "nor bu dbang gi rgyal po", the main variant form of the black or blue-black Six-armed Mahakala, main protector of the Shangpa Kagyu tradition. Included among the "Thirteen Empowerments of the Protector. " After Khedrub Khyungpo Naljor's original introduction of this teaching cycle into Tibet, the two main forms of the six-armed protector became popular with all the Sarma schools of Tibetan Buddhism. Hence, his sadhanas can be found in such varied collections as the texts of the Shangpa Kagyu, the "sgrub thabs rin 'byung brgya rtsa" by Jetsün Tāranātha, the "sgrub thabs kun btus" compiled by Jamyang Khyentse Wangpo and Jamyang Loter Wangpo, and the writings of quite a number of Gelugpa masters. Whereas the blue-black form of the protector is practiced mainly for protective purposes, this semi-peaceful white form is worshiped mainly for wealth and prosperity, and particularly to relieve the suffering of poverty of others. As Kyabje Tenga Rinpoche used to inform the many who requested this empowerment from him, to attempt to practice this, or any other wealth deity for that matter, with the sole aim of becoming rich or just to provide for oneself, would be the worst of motivations and completely wrong!

From the instruction manual by Jamgon Kongtrul:

"If you have worshiped either [form of the] protector, black or white, with the sole aim of gaining power or wealth for yourself, you have created obstacles for the attainment of the supreme accomplishment and not even your ordinary hopes and wishes will be fulfilled!"