Thirteen Empowerments of the Protector 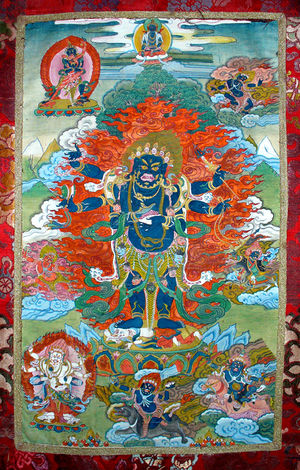 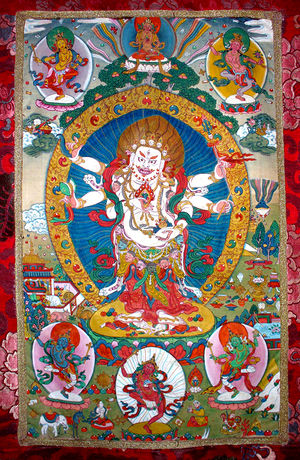 A series of empowerments for the various aspects of the "Swift-acting Six-armed Awareness Protector" (myur mdzad ye shes kyi mgon po phyag drug pa) commonly known as the Six-armed Mahakala, who is considered a wrathful emanation of the Great Compassionate One, Arya Avalokiteshvara. He is the special protector of the Shangpa Kagyu tradition and its practitioners to the present day. Included among the thirteen empowerments are the regular wrathful black form known as the "Dispeller of All Obstacles" (bar chad kun sel) and the semi-peaceful white form known as the "White Protector Wish-fulfilling Jewel" (mgon dkar yid bzhin nor bu), which are the two main aspects of the protector. Whereas, as his name suggests, the wrathful black "Dispeller of All Obstacles" is practiced for protective purposes, the semi-peaceful white "Wish-fulfilling Jewel" is worshiped mostly as a wealth deity. There are also the yellow, red, green and maroon protector, and the protector with various configurations of retinues, with or without consorts etc. A special transmission of the Shangpa Kagyu tradition, originating with the Indian Mahasiddha Shavaripa, which was received by Khedrub Khyungpo Naljor, both in India and Tibet, from his teachers Maitripa and Rahula. Ever since the incomparable Tsongkhapa Lobsang Dragpa, and one of his main students, Khedrub Je Geleg Palsang, received these transmissions from Jagchen Jampa Pal, and again from Müchen Namkhe Naljor, the Six-armed Protector is also one of the main protective deities of the Gelugpa school. There are also other lineages of Six-armed Mahakala practice, but they all go back to Khyungpo Naljor's original introduction of this cycle of empowerments, teachings and practices to Tibet. The sole exception is the Six-armed Mahakala treasure teaching revealed by Chokgyur Dechen Lingpa and included in his collected terma treasures, the Chokling Tersar. [TSD]