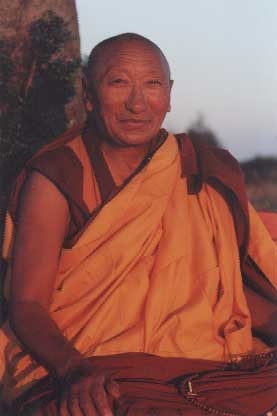 After taking birth in Dza Chukha in the eastern area of Dokham, he was from early childhood endowed with an extraordinary intelligence and a compassionate character. Many accomplished masters foretold that he was an emanation of Vajrapani, the Lord of Secrets who is the compiler of the teachings of all the victorious ones, and of great beings such as the Tibetan great Lotsawa Dharma Shri.

When eleven years of age, he received the ordination to be a novice. From then on and up to the age of 28, he followed numerous learned and accomplished spiritual masters including Adzom Gyalsey Gyurmey Dorje, Tubga Yishin Norbu, Bötrül Tamchey Khyenpa, Jamgön Shechen Kongtrül, Paltrul Namkha Jigme, Pukung Khenchen Chödor, and many others. From these masters he received the complete training in Sutra, Mantra and the authoritative fields of knowledge, and thereby earned the title "mahapandita of the fivefold fields of knowledge."

At the age of 28 he received the full monk ordination from Dzogchen Khenchen Tubten Nyendrak and has since then correctly observed the three level of precepts - Pratimoksha, Bodhisattva, and Mantrayana - with neither conflict nor transgression. Due to his peaceful nature and his gift for never getting angry, he has become an example for Buddhists all over the world.

From 29 to 51 he remained in loose retreat during which he chanted the Manjushri Nama Sangirti Tantra in six hundred verses several hundred thousand times. In this way he has earnestly practiced, like the steady flow of a river, the profound and secret levels of meditation and sadhana, and hereby realized the self-existing wakefulness of the Great Perfection in which insight and compassion are indivisible. From the age of 52, he functioned as the khenpo at Dzogchen Shri Singha, the great Buddhist Institute for Higher Learning. There he taught for four years several hundred students in the ten fields of knowledge. During the fifteen years from then on and until today, 1982-1997, he has traveled widely throughout the world, and it is through his kindness of constantly teaching the sublime Dharma of both Sutra and Tantra, that he has spread an immense benefit that extends to many hundred thousand people.

In addition, he has been able to establish ten new centers for teaching and practice of the Dharma comprised of statements and realization. He has also reared several hundred close disciples capable of propagating the sacred Dharma to others. The number of people who are within his sphere of spiritual influence exceeds 20,000. Since his disciples are compiling the five topics of knowledge in book form, this great treasury of eloquent exposition will in the future be a field of merit for all people.

In short, he is an accomplished great Dharma Master, a confluence of erudition, purity and noble-mindedness. At present, his residence is at the newly built center for teaching and practice for monks and nuns near Arig in eastern Tibet where he lives at a mountain hermitage while teaching the Dharma of Sutra, Mantra and the fields of knowledge.

This brief introduction was written by the devoted disciple Dzogchen Khenpo Choga on the first day of the seventh month in 1997. Translated into English by Erik Pema Kunsang.