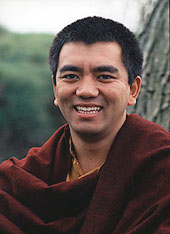 The Seventh Dzogchen Rinpoche Jikme Losal Wangpo, was born in Sikkim in 1964. His father was the late Tsewang Paljor, the private secretary of Jamyang Khyentse Chokyi Lodro and his mother was Pema Tsering Wangmo of the Lakar Tsang family, known as great patrons of Dharma in the Kham region of eastern Tibet.

He was recognised as the seventh incarnation of Dzogchen Pema Rigdzin by the fourth Dodrupchen Rinpoche, Thupten Thrinle Palzang, and this was confirmed by His Holiness the Dalai Lama. The enthronement ceremony was conducted by Dodrupchen Rinpoche on the 8th of October 1972, in Sikkim's royal palace at Gangtok. Dodrupchen Rinpoche then directed the young tulku towards Dzogchen Khenpo Rahor Thubten, who became his tutor for the next three years. During this time, Rinpoche studied and received the Nyingma Kama from Dodrupchen Rinpoche, Rinchen Terdzö from Dilgo Khyentse Rinpoche, and the complete teaching of Pema Lingpa from Dudjom Rinpoche.

Rinpoche's education was closely supervised by the Dalai Lama. In 1976, Rinpoche joined the Institute of Buddhist Dialectics in Dharamsala, where he stayed for the next seven years studying Prajnaparamita and Pramanavarttika, obtaining the certificate of Rabjampa. The Dalai Lama arranged his accommodation and personally covered all his expenses.

Rinpoche lived in a small room at the Buddhist School of Dialectics, and the Dalai Lama would often visit him here, as did Dilgo Khyentse and His Holiness the 16th Karmapa. At the request of the Dalai Lama, Khenpo Mewa Thubten would visit Dharamsala for two months each year, and with him Rinpoche studied Longchenpa’s Seven Treasures and Ngalso Korsum and Patrul Rinpoche's Kunzang Lama’i Shelung. He also received the transmission for the Chokling Tersar from Dilgo Khyentse Rinpoche, Dudjom Terchö from Dudjom Rinpoche and Könchok Chidü from Trulshik Rinpoche.

Throughout his years of study, Rinpoche displayed exceptional learning ability, and although he was up to six years younger than his fellow students in Dharamsala, he quickly mastered the art of debate and revealed a high degree of wisdom.

In 1985, Rinpoche accepted an invitation to visit Dzogchen Monastery in Tibet. Rinpoche was greeted by a magnificent welcome party of lamas, monks and laymen; all overjoyed to see the Dzogchen Rinpoche return to Tibet. Rinpoche was able to meet with all the head lamas of his branch monasteries, and he made pilgrimage to many of the regions sacred sites. The same year, at the invitation of his brother, Sogyal Rinpoche, he made the first of what has become a regular series of visits to the Western world; teaching in Europe, America and Australia. He then returned to South India and continued construction of Dzogchen Monastery. Rinpoche enjoyed study very much and between 1986 and 1989 his time was split between working on the monastery and studying Madhyamaka philosophy in Dharamsala.

In recent years, through the inspiration of His Holiness the Dalai Lama, and with the generous support of Sogyal Rinpoche and the international Rigpa sangha, Rinpoche has worked selflessly to improve the quality of life for the Tibetan refugee community in India. And, at the same time has continued to care for his monastery, the education, training and welfare of its monks, and the spiritual needs of the local community.