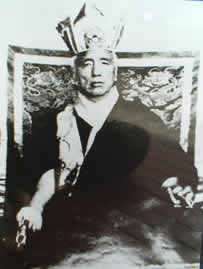 One of five reincarnations of Jamyang Khyentse Wangpo. He was a great master upholding the Rimey (nonsectarian) tradition, as well as being one of the two main root gurus of His Holiness Dilgo Khyentse. His three reincarnations live presently at Bir, Himachal Pradesh; in Dordogne, France; and in Boudhanath, Nepal. Dzongsar means 'New Castle,' Khyentse means 'Loving Wisdom,' and Chokyi Lodro means 'Intellect of the Dharma.' [RY]

"Kyabje Khyentse Chokyi Lodro of Dzongsar was the greatest master of many lineages of this century. He was born in the Water Snake year of the fifteenth Rabjung (1893) at Rekhe Ajam near Kathok Monastery. His father was a tantric master called Gyurme Tsewang Gyatso, the grandson of Terton Dudul Rolpatsal of Ser Valley of Amdo, and his mother was Tsultrim Tso of Ser Valley of Amdo. His father named him Jamyang Chokyi Lodro. ... When he was seven, Kathok Situ Chokyi Gyatso, the nephew of Khyentse Wangpo, brought him to Kathok Monastery and recognized him as the action-manifestation of Khyentse Wangpo, as prophesied by Kongtrul Yonten Gyatso. Situ performed the hair-cutting ceremony and named him Jamyang Lodro Gyatso."

"Situ assigned his own tutor, Khenpo Thupten Rigdzin, to Khyentse, and under his tutorship Khyentse studied prayers, grammar, astrology, Sanskrit, and many scriptures. From Kathok Situ he received the transmission of Nyingthig Yabzhi, Longsal cycles, and many other scriptures, and Situ became the most important person for his spiritual path and secular life. From Adzom Drukpa in Trom Valley he received Longchen Nyingthig, Gongpa Zangthal, Lama Yangtig transmissions, and the introduction to Trekcho meditation."

"At twenty-six, he went to Dzogchen Monastery and received ordination as a monk from Khenpo Jigme Pema Losal. Also, from Zhechen Gyaltsap he received transmissions of Changter, Minling ter, and many other teachings. That same year, he established a shedra called Khamche at Dzongsar Monastery. He invited Zhenphen Chokyi Nangwa (aka Zhen-ga, 1871-1927) of Dzogchen Monastery as the first khenpo to teach at the new shedra. Later it became a famous institution from which many great scholars emerged."

"At thirty-two, at Zhechen Monastery, he again received many transmissions, including Dam-ngak Dzo and Changter from Zhechen Gyaltsap Pema Namgyal, who became one of his important teachers.

"At thirty-three, he went on a pilgrimate to Central Tibet. At Mindroling Monastery he took the ordination of a monk from Khenpo Ngawang Thupten Norbu for the second time, as his predecessor had been ordained at this monastery in the lower Vinaya lineage."

"He received many tantric transmissions of the Geluk school from Jampal Rolwe Lodro, popularly known as Amdo Geshe, who lived in Golok. He received the Lamdre Lopshe, Vajrabhairava, and Mahakala cycles from Gaton Ngawang Lekpa. From Kathok Khenpo Ngawang Palzang he received transmissions of the Khandro Yangtig, Longsal, and Dudul cycles. In total, he studied with about eighty masters from all the different traditions of Tibetan Buddhism."

"He had many visions, accomplished many attainments, and manifested many spiritual powers, but because of his humility he only indicates a few of them in his autobiography:"

If I had been trained myself in logic,
I could have acquired good knowledge of reasoning, But it would have brought little benefit.
As I was able to memorize
The Three-Root Sadhanas, the Magon, and other prayers of Longchen Nyingthig, and
Some assembly prayers of the Ngor tradition,
I had good habits [or memories] of the past lives.... I remembered the glorious Sakya Monastery,
Clearly in my mind again and again, and
Taking birth in the Khon family,
In my past lives.
I remembered being Ngan Panchen, great Lhatsun, Ngawang Lobzang Gyatso,
Tsang-yang Gyatso, Palkhyen, and others.... Thangtong Gyalpo introduced me
To the nature of intrinsic awareness with the support of a crystal. In dreams I saw Aryasthavira Angaja,
Vimalamitra, and Longchenpa.
I received long-life empowerment from Khyentse Wangpo. From the great bodhisattva Paltrul
I received instruction on the ngondro of Longchen Nyingthig. From Nupchen Sangye Yeshe
I received entrustments of many tantras.
I experienced or dreamed of the receiving of blessings From some lamas of Lamdre,
Milarepa, and Tsongkhapa. I was shown the tantric disciplines
By Lhatsun Namkha Jigme.

"At fifty-six, he married Khandro Tsering Chodron (b. 1925) of the Aduk Lakar family as his spiritual consort. According to his own prophecies and those of Khyentse Wangpo and Kongtrul Yonten Gyatso, this union was for dispelling the obstructions of his life and for promoting his enlightened activities."

"At the age of sixty-three, traveling through Lhasa he reached India and survived the political turmoils of Tibet. He went on a pilgrimage to all the sacred places of Buddhism in India and Nepal. Then he made the Palace Chapel of the king of Sikkim his main temporary residence and continued to give endless teachings and transmissions to devotees from all walks of life."

"At the age of sixty-seven, on the sixth day of the fifth month of the Earth Pig year of the sixteenth Rabjung (1959), he passed away amid signs of lights, earthquakes and sounds. Today most of his remains are preserved in a small golden stupa at the Royal Chapel of Sikkim, which Khandro Tsering Chodron takes care of while dedicating her life to meditation and prayers.

His tulku is Thupten Chokyi Gyatso (Khyentse Norbu, b. 1961?), the son of Dungse Thinley Norbu Rinpoche and the late Jamyang La, and the grandson of Kyabje Dudjom Rinpoche and Lopon Sonam Zangpo of Bhutan. [2]