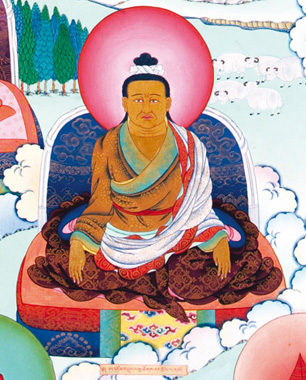 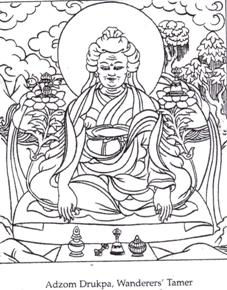 Known as 'The Wanderers Tamer' Adzom Drukpa (1842-1924) — Drodul Pawo Dorje ('gro 'dul dpa' bo rdo rje); Was the incarnation of Ma Rinchen Chok (rma rin chen mchog) and one of the greatest Dzogchen masters of the early twentieth Century. He was the disciple of both Jamyang Khyentse Wangpo and Paltrul Rinpoche, and teacher to the 2nd Jamyang Khyentse, Chokyi Lodro. Trusted dharma-friend and contemporary to Jamgön Mipham, he received teaching and transmission from such master as; Kathog Situ, Shechen Thutob Namgyal, Kongtrul Lodro Thaye and Kathok Moktsa Rinpoche. Also received visions of Rigdzin Jigme Lingpa, whereby he was taught directly, and Khandro Yeshe Tsogyal. After taking up the life style of a Terton, he became an inheritor of hidden-treasure and prolific author. Thus he was one of the most important masters of Longchen Nyingtig lineage and essential link in the Nyingtig’s Oral-transmission of Yeshe Lama and Tsa-Lung. Two of his main student were is sons Agyur Rinpoche and Pema Wangyal, however 13 of his students were known to have achieved rainbow body. [BL]