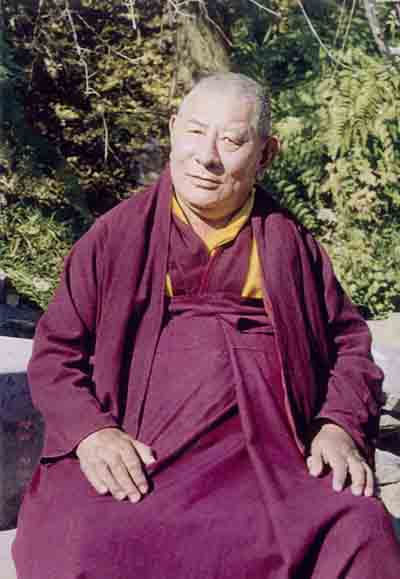 Growing up under the guidance of his uncle Jalu Khenpo Tsewang Rigdzin, Khen Rinpoche Thupten Ozer was taught reading and writing, as well as memorization of pujas and prayer. Around the age of fourteen, his uncle the great Jalupa sent him to study under Khenpo Thubga (Thupten Chophel), and Poba Tulku Dongak Tenpei Nyima. Studying under Khenpo Thubga for little more than a year, Rinpoche took his novice monk vows from this master. Then spenting the better part of a decade, he studied the entire heritage of philosophical, practical and meditational works of Lord Jamgon Mipham Namgyal Gyamtso, from his Lord of Refuge, Kunzik Dongak Tenpei Nyima.

Later in exile, after having become the heir to the vast spiritual lineage of Mipham Rinpoche and Dongak Tenpei Nyima, Rinpoche became one of the most sought after Khenpos of the Nyingma school. In fact had it not be for his amazing knowledge and insights to the viewpoints of Mipham's work, Rinpoche would have happily spent his years in retreat in the caves and later the heritage he and his main student Khenpo Konchog Monlam built in the Pagan valley of northern India. After spending some 13 years in retreat in Pagan, Rinpoche found himself surrounded by students and began teaching all the tulkus, khenpos, lamas, monks and nuns that asked him for guidance. He became known for the special kindness and care he took in the training and teaching of nuns, whom he treated as equals to any of the monks. Rinpoche passed September 2000, he was one of the most important Khenpos to many of the Nyingma tulkus and lineage-holders teaching today.

[I wrote this off the top of my head and need to check some fact and dates before add and making it more of a real biography, BL]

Outwardly you adopted pure conduct as you are Shantarakshita

Inwardly you’re enlightenment mind is that of Master Shantideva

Secretly you practice mantra as Vimalamitra

Thupten Özer, at you lotus feet I pray!