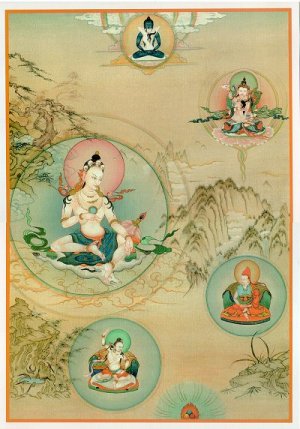 The incarnation of Semlhag Chen, a god who earlier had been empowered by the buddhas. Immaculately conceived, his mother was a nun, the daughter of King Uparaja (Dhahenatalo or Indrabhuti) of Uddiyana. Garab Dorje received all the tantras, statements and instructions of Dzogchen from Vajrasattva and Vajrapani in person and became the first human vidyadhara in the Dzogchen lineage. Having reached the state of complete enlightenment through the effortless Great Perfection, Garab Dorje transmitted the teachings to his retinue of exceptional beings. Manjushrimitra is regarded as his chief disciple. Padmasambhava is also known to have received the transmission of the Dzogchen tantras directly from Garab Dorje's wisdom form. Garab Dorje means 'Indestructible joy.'

(From the glossary to The Lotus-Born, the biography of Padmasambhava.)