Shri Singha was the chief disciple and successor of Manjushrimitra in the lineage of the Dzogchen teachings. He was born in the Chinese city of Shokyam in Khotan and studied at first with the Chinese masters Hatibhala and Bhelakirti. In his Ocean of Wondrous Sayings, Guru Tashi Tobgyal adds that Shri Singha received a prophesy from Avalokiteshvara while traveling to Serling, telling him to go to the Sosaling charnel ground in order to be sure of the ultimate attainment. After many years Shri Singha met Manjushrimitra in the charnel ground of Sosaling, and remained with him for twenty-five years. Having transmitted all the oral instructions, the great master Manjushrimitra dissolved his bodily form into a mass of light. When Shri Singha cried out in despair and uttered songs of deep yearning, Manjushrimitra appeared again and bestowed him a tiny casket of precious substance. The casket contained his master's final words, a vital instruction named Gomnyam Drugpa, the Six Experiences of Meditation. Having received this transmission, Shri Singha reached ultimate confidence. In Bodhgaya he found the manuscripts of the tantras previously hidden by Manjushrimitra which he took to China where he classified the Instruction Section into four parts: the outer, inner, secret, and the innermost unexcelled sections. Among Shri Singha's disciples were four outstanding masters: Jnanasutra, Vimalamitra, Padmasambhava and the Tibetan translator Vairotsana. [RY]

According to the Khandro Nyingthig tradition, it is also said that Shri Singha received teachings directly from Manjushrimitra's guru, the nirmanakaya buddha Garab Dorje. CJD 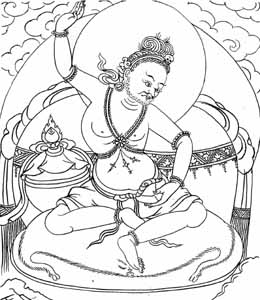 Additionally, a note by A.W. Barber (see Reference Sources below) says: "I have been able to ascertain that Sri Simha was of central Asian origins and that he lived in India.......Thus, it would appear that Sri Simha took the Atiyoga line to Andhra and made his residence at the famous Dhanyakataka along the Krishna River. From here it was transmitted to teachers who then took the line to Tibet and China." It seems Shri Singha established a permanent residence in South India.

The general realization of the Mind Section, the spontaneous meditation song about the precious jewel, was sung in these words by Shri Singha in his meditation hut during a feast offering.

Hung
However thought of, it defies imagination;
However spoken of, it cannot be discerned;
But from the basic space of wakeful vastness
Shines forth a light that never need be sought.

In dharmata which thoughts can never fathom
Remain unwavering and evenly composed.
There is, I see, no other training.

The spear tip of my wakeful knowing
Rends asunder my enemy, my thoughts.
Ratna kosala a hoh

This was the nineteenth; the essential realization of the general Mind Section. ithi.
(from Wellsprings of the Great Perfection), RY