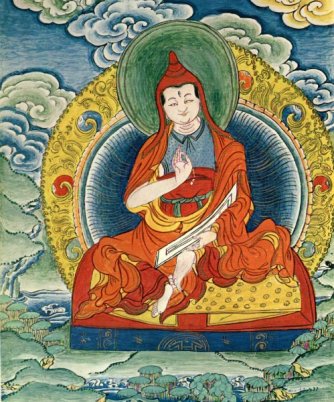 Vairotsana (rnam par snang mdzad lo tsa ba). The great and unequalled translator during the reign of King Trisong Deutsen. Vairotsana, (also pronounced be-ro-tsa-na), was recognized by Padmakara as a reincarnation of an Indian pandita. He was among the first seven monks and was sent to India to study with Shri Singha. Shri Singha in turn entrusted Vairotsana with the task of propagating the Mind Section and Space Section of Dzogchen in Tibet. He is one of the three main masters to bring the Dzogchen teachings to Tibet, the two others being Padmakara and Vimalamitra. Vairotsana's chief disciples were Yudra Nyingpo, Sangtön Yeshe Lama, Pang Gen Sangye Gonpo, Jnana Kumara of Nyag, and Lady Yeshe Drönma. An especially renowned disciple was the old Pang Gen Mipham Gönpo whose disciples attained the rainbow body for seven generations by means of the oral instructions entitled Dorje Zampa (rdo rje zam pa), the Vajra Bridge. Terchen Dorje Lingpa, Terdag Lingpa Gyurmey Dorje, Tsele Natsok Rangdröl, and Jamgön Kongtrül Lodrö Thaye are regarded as reincarnations of Vairotsana. Shechen Gyaltsap mentions in his Pond of White Lotus Flowers that Vairotsana, before meeting Shri Singha, had met the wisdom forms of the two vidyadharas Garab Dorje and Manjushrimitra in a miraculous pagoda at Dhahena. After he had presented a huge offering of gold, they conferred empowerment upon him and bestowed their blessings, with the prediction that he would receive the complete teachings from Shri Singha. EPK

Lochen Vairotsana was born in Central Tibet in the Nyemo district in Jekhar. He was sent to India to bring back the Dzogchen texts and transmission by King Trisong Detsen at the behest of Nub Namkhai Nyingpo. After great hardship he arrived in Uddiyana and near the Dhanakosha Lake, in a sandalwood forest, he found Shri Singha living in a nine storied pagoda. After passing a protective yogini to whom he demonstrated his powers, Vairotsana attained audience with Shri Singha who heard his plea for the effortless Dzogchen teaching and asked for time to think about it. The next morning Vairotsana returned and Shri Singha promised him the Atiyoga doctrines. Due to the hostility of the Uddiyana king to the Dzogchen teaching he insisted that in the day time Vairotsana should join the panditas learning the causal vehicle and only at night time would he receive the Atiyoga teaching. So during the night the master Shri Singha wrote the eighteen tantras of the Mind Series in goat milk on white silk which would become visible when exposed to heat. Vairotsana was dissatisfied with the Mind Series instruction and asked for more. Shri Singha gave him the initiation and empowerment into the tantras and also all the teaching on the Space Series in the black, white and variegated modes. Still Vairotsana was not satisfied but Shri Singha would give him no more. The first of the transmission texts of the Mind Series is called "The Cuckoo: Total Presence" (Rikpai Kuchuk) otherwise known as "The Six Vajra Verses".

Then Vairotsana found the Acharya Garab Dorje in the cremation ground called Place of Smoke, Dhumasthira, and he received the entire sixty-four hundred thousand Dzogchen verses. Simultaneously with this transmission he attained liberation and nirvana and the highest siddhi and he returned to Tibet by speed-walking.

In Tibet Vairotsana taught the King in the same manner as Shri Singha had taught him - by day the causal approach and at night the fruition approach - Dzogchen. But political intrigue at court cut short the king's study with Vairotsana. The Indian King had got wind of the transmission of the secret doctrines to Vairotsana and assisted by one of the King's queens, Tsepong Za, who had her own political agenda, Vairotsana was slandered and then banished to the far east, to Tsawa Rong in the country of Gyelmo Rong. In Gyelmo Rong he taught Dzogchen to Yudra Nyingpo, Sangton Yeshe Lama and the old beggar Sangye Gompo.

In central Tibet he taught Nyak Jnanakumara, and the Khotanese Queen Liza Sherab Dronma. Later he was invited to Khotan.