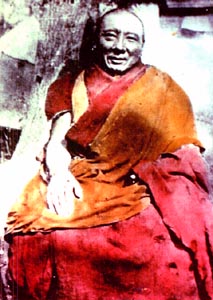 Vimalamitra's emanation named Dharma Banza
Will come to southern Kham in the monkey year.
If victorious over the demons of obstruction
Excellent work of the essential Dharma will be done.

Just as these and other prophecies indicated, Thupten Chokyi Dorje was born in 1872 in Chamdo. He was subsequently recognised as the Fifth Dzogchen Rinpoche and welcomed to Dzogchen Monastery. His tutors Patrul Rinpoche and Great Khenpo Padma Vajra gave him teachings and personal instructions on the sutras and tantras, and most especially all the Heart Essence cycles of the Great Perfection. In addition, from Jamyang Khyentse Wangpo and Kongtrul Yonten Gyatso he received the maturing empowerments of the Great Treasury of Precious Treasures.

Practicing what he had learned, he became a greatly accomplished master. This he demonstrated by leaving his footprint in rock, and his ritual offerings produced nectar as they melted into light. When giving empowerments, the master’s anointing vase never ran dry, and he would balance it, as if on a shelf, in mid air. He was also known to hang the shawl of his robes on the sun's rays. His clairvoyant vision was obscured and this enabled him to discover over one hundred of the main Nyingma tulkus of the time. He would state the incarnate lama’s place of birth, parents’ names and other details, and not one of his predictions was ever wrong. Among the tulkus that he recognized, those still living today include Penor Rinpoche and Dodrup Rinpoche.

As a result of Thupten Chokyi Dorje's teachings, practice and activities, Dzogchen Monastery was greatly expanded. He constructed the Gonkhang Wangdruk Rolwe Temple and the main five-storied temple, filling them with statues, paintings and scriptures. He also initiated the offering ceremonies of the Eighty Revealed Treasures and the Great Kila ceremony and dance.

Due to his requests Jamgon Mipham Rinpoche and Great Khenpo Zhenga composed many commentaries on the sutras and tantras and he commissioned the carving of ten-thousand wooden printing blocks to make these texts available. During this time over two thousand monks came to live in the Rudam valley and the number of branch monasteries increased to over two hundred.

Amongst the many students who received Thupten Chokyi Dorje's teachings, the principal ones included Dzongsar Khyentse Chokyi Lodro, the Sixth Rabjam Nungzit Drupe Dorje, the Fourth Dodrup Thupten Trinley Palzang, Gatok Seder, Dilgo Khyentse Rinpoche and Yakze Jarluba Sonam Namgyal. Thus having completed his excellent work he finally passed into peace in 1934 at the age of sixty-one in the Rudam valley.

The Fifth Dzogchen Rinpoche was born in the same region as the first incarnation, Kham Riwoche, and was enthroned as the Thupten Chokyi Dorje Tendzin Jigme Wangpo. He received many ripening and liberating nectars [of teaching] from Jamyang Khyentse Wangpo, Garwang [Jamgon] Lodro Thaye, [Patrul] Orgyan Jigme Chokyi Wangpo and many other accomplished siddhas of the Old and New Tantra Schools. Without relying on any training in the traditional sciences such as Grammar and Logic, he mastered the sky-like treasury of the complete teachings of Dharma and spontaneously aquired expansive realization. He traversed the paths and bhumis [in one sitting] and arrived at the wish-fulfilling state of attainment without restricting himself to the straits of intellectual analysis, effort or ambition. As a result, he flew through the sky like a bird, his sadhana offerings and shrine tormas melted into light and became nectar, he tied the sun in its place, made the empowerment vase float in space, made the saffron water of the vase inexhaustible, left footprints in rocks, and produced water in hell-like fearful deserts. Once, after he wiped his bleeding nose with a cloth, the cloth was seen as transformed into a thangka full of blessing relics. Other signs of accomplishments were seen by all mundane people.

In his actual experience of pure vision in clarity, he traveled to [Zangdok] Palri Pema ÖLing, and was twice present there at the feast of the Gathering of the Vidyadharas. He was able to unobstructedly see all hidden phenomena and he recognized many great masters, who held the lineages as a result of hearing his vajra speech. He spontaneously realized and understood other peoples' mind stream. No matter how wrathful the being, such appearances were overpowered by the mere sight of this holy master, and he had other similar powers. These are the inconceivable yogic activities which are the outer appearances of the inner signs. Other than that, so far as the expanding and propagating the teaching, practice, and activities of dharma are concerned, he raised the number of retreats from thirteen to thirty, and established a new retreat centre for [practicing] Amitayus, the Buddha of Long Life, at Kyalgyi Takkar, where thirteen retreatants practiced continuously. Shri Singha monastic college's number of participating students increased to fifty.

Through [Dzogchen Rinpoche's] aspiration and at his request, Khenpo Shenga Rinpoche composed the word commentaries to the Thirteen Great Treatises[, for which wood-blocks were constructed,] and they were printed. At Dzogchen Monastery and Shri Singha, he constructed more than 10,000 pages [of wood-blocks] of texts from both the Old and New Translation Schools. Through the power of his support for the teachings of study, meditation, and action, innumerable [beings] accomplished the highest state of scholarship and meditation practice. The fortunate disciples who received his profound speech of confidence were like the stars in the sky, and they all performed inconceivable beneficial activities for the doctrine. During the time of this Lord, [Dzogchen Monastery] expanded to include more than two hundred branch monasteries.

Over a thousand monks gathered and resided continuously [at the Dzogchen Monastery]. Moreover, [during the time of the Fifth Dzogchen Rinpoche,] a thousand-fold offering [of butter lamps and other gifts], the Gönkhang Wangdrak Rolpa, the five-storied Lhasar and many other new shrines and temples [sanctuaries and sacred objects] were constructed. He newly established the annual drupchen practices of eighty offering mandalas of kama and terma; the drupchen of Amitayus, the Buddha of Long Life called Victorious Over the Four Maras : Unifying Prosperity and Life, including all the minor branches; Phurchen [Vajrakilaya], Liberating all the Enemies and Obstructers, including the lower activity and sacred tantric dance; the Dzamling Gesar King, a remedy for conquering any foreign invasion, with the entire retinue of the commanding Phunu, the Dralas - the Gods of Lungta, and their sacred dance. He also started the annual offerings of the thirty ever-burning butter lamps, over 100,000 butter lamp offerings, and other offerings. His great and vast work in establishing all these virtuous activities was like the white umbrella, which pervades the varied religious countries in the world, even with their different races and languages.

དྲི་མེད་མཁྱེན་པའི་ལྷ་ལམ་ཡངས་པ་ནས། །
From the vast space of stainless knowledge,
བརྩེ་བའི་སྙིང་རྗེ་འོད་སྟོང་འབར་བའི་གཟིས། །
You clear away the dense darkness of all beings,
འགྲོ་རྣམས་མུན་པའི་སྨག་རུམ་སེལ་མཛད་པ། །
From the brilliance that shines with a thousand lights of loving compassion;
ཐུབ་བསྟན་ཆོས་ཀྱི་རྡོ་རྗེར་གསོལ་བ་འདེབས།། །།
Thupten Chökyi Dorje, to you I pray!