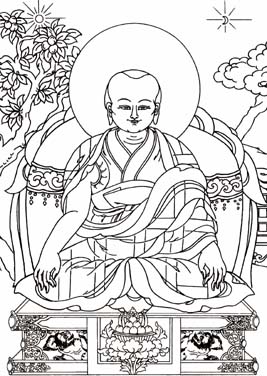 INTRODUCTION FROM THE 1997 PUBLICATION OF HIS COLLECTED WORKS: During the early 1970s, when I was studying with the late mkhan po sangs rgyas bstan 'dzin (Khenpo Sangye Tendzin 1923-1990) of ser lo dgon pa, Nepal. I first heard of Glag-bla Bsod-nams-chos-'grub(1862-1944), who was also known as bshad sgrub pa'i rgyal mtshan, or more popularly, as rme ri dge slong. mkhan po sangs rgyas bstan 'dzin's excellent personal collection of the writings of khams pa masters associated with the so-called ris med movement included Lagla's extensive commentary on one of the most celebrated of dedication prayers, the bde smon of Karma Chags-med (no.54 in our present collection). The treatise, which was also among the few works of our author to have appeared outside of Tibet (it was published at least twice in India during 1970s), seemed to suggest that Lagla , like Chagme himself, had a special interest in reaching beyond the restricted circle of scholars in the monastic colleges, and bringing the teachings also to a broader range of monks and laypersons. For on the basis of of the bde smon rebirth in the Western Paradise of the Buddha Amitabha, Lagla had elaborated an comprehensive survey of the path in a style that lend itself to public discourse and preaching.

It was with his background that I was interested to learn, on visiting the dkar sdzes regional translation bureau in Kanding (dkar rtse mdo), Sichuan, in 1992, that the bureau had recently published a five volume collection of Lagla's works, containing all of his writings that could still be located, and that indeed there had never been a gsung 'bum (Collected Works) of this master published previously. The publication had been inspired by Jamyang Nyima ('jam dbyangs nyi ma) a contemporary dependent of Lagla's ancestral clan, and the idea was taken up by the directors of the translation bureau, bsod nams dar rgyas (Sonam Dargye) and dkon mchog bstan 'dzin (Konchog Tendzin). The project was further encouraged by the most renowned proponent of rdzog chen in eastern Tibet, mkhan po 'jigs med phun tshogs (Khenpo Jikphun), of ser rta. It is this collection that in reproduced here.

In 1883 (read chu lug for shing mo lug given in the text no.52 pg.6 line 2) Lagla left his homeland and entered the Shri Singha College of Dzogchen Monastery, where he rose to the ranks of mkhan po, but refused to accept a formal appointment at the college. He preferred to continue his studies, and traveling in many district of khams, and numbered among his teachers are some of the foremost rnying ma pa masters of the age, including mi pham 'jam dbyans rnam rgyal (1846-1912), the 5th rdzog sprul thub bstan chos kyi rdo rje (1872-1935), o rgyan bstan 'dzin nor bu (Onpo Tendzin Norbu).

During his late career, Lagla spent various periods visiting different monasteries and retreats, sometimes to teach, but on other occasions practicing solitary meditation. During the course of thirteen summers he taught the Vinaya while serving as the mkhan po for the summer retreat at thub bstan bshad sgrub 'phel rgyas gling in brag lha rdzong. He became particular renowned as well for his discourses on the Bodhicharyavatara, the Guhyagarbha Tantra and other major texts. As for his more intimate instructions on rdzog chen meditation. In and around Derge he promulgated his teaching associated with the bde smon, and also preached widely in nyag rong. At the age of sixty-five he entered strict solitary retreat for a period of seven years at mkhar sgang 'chi med ri khrod. Lagla passed away in the wood money year (1944), his eighty-third year

By Matthew Kapstein
I re-typed this from the TBRC scans of this pulication and added the English names of place and people. [BL]