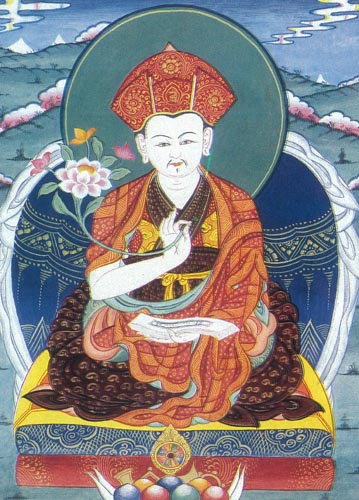 Khedrub Karma Chagme, Raga Asey was the first Chagme Rinpoche. His coming was prophesied by Guru Padmasambhava in many treasure texts.
The Great Terton Ratna Lingpa prophesized:
In the place of Ngom a being called Raga Asey will be born,
He is the manifestation of Chenrezig
There will be thirteen reincarnations of this great being
Whoever sees him will be liberated in the blissful Buddhafield.
Namchö Mingyur Dorje prophesied
In the vast expanse of the Immeasurable Light Buddha,
Appears the Complete sunlike Avaloketeshvara Illuminating rays from the heart of Padmasambhava
Is Karma Chagmey, who will appear in Ngom,
Dispelling ignorance of all sentient beings.
His emanation Pema Chukye in the Amitabha Buddhafield;
His emanation Dro La Sek in the Medicine Buddhafield;
His emanation Maja Drenpei Gyaltsen in the Ngayabling;
All his emanations appear for the benefit of sentient beings.

Referring to Karma Chagme's thirteen reincarnations that will have the self-emerging letter 'Ah' on their foreheads. As clearly prophesied, Karma Chagmey is the embodiment of the Three Kayas who are Amitabha, Avaloketeshvara and Padmasambhava. There are many other precise prophecies about him.
In 1603 Karma Chagmey the first was born in a village called Ngom. His father was Anu Pema Wang of the Dong Khachopa tribe who were the descendants of the great Dharma King Trisong Detsen. His mother was Chokyong Kyid.
At the age of five he recognized the true nature of mind and he perfected the Kyerim skills. During his ninth year he went to Zadam to study and mastered all the philosophies and quintessential teachings and thus became one of the greatest masters.
From his root guru Garwang Chokyi Wangchuk he received Mahamudra and Dzogchen teachings. He stayed at his main seat in Pari Tse in Neydo where he had visions of deities. Dharmapalas served him as their master. He had had the signs of high accomplishments, clairvoyance and power. His level of understanding is believed to be tasteness stage of the four stages of accomplishment. Through his empowerments, teachings and writings many realized their true nature. He subdued many spirits. Thus having many qualities, he remained a great Siddha. The derivation of Neydo Kagyu Lineage came from him.
He had five main disciples who were Namcho Mingyur Dorje, Palyul Kunzang Sherab, Dzogchen Pema Rigzin, Goche Orgyen Tharchin, Neydo Dechen Rinpoche. He had many other great disciples as well.
His teachings spread all over Eastern Tibet. His writings comprised of seventy-seven volumes of Mahamudra and Dzogchen teachings from his mind treasure. All his teachings were written after having a vision of Guru Rinpoche during his strict twelve-year retreat. Having been given the permission from the deities he gave teachings which were very lucid, effective and full of blessings.
After promoting the Dharma and liberating immeasurable sentient beings he passed into Mahaparinirvana at the age of 69. After the cremation of his body many relics and self-emerging images of deities were found. On his skull was the naturally embossed letter 'Ah'. (by Khentrul)


Chagme Raga Asey (chags med ra ga asya) (1613-1678.) A monk of the Karma Kagyu school, who spent thirteen years in retreat from 1649 until 1662, the last seven years of which he was joined by Mingyur Dorje 1645-1667, who entered the retreat at the age of ten. During this retreat the young Mingyur Dorje had visions that Karma Chameh wrote out as thirteen volumes of "Space-Dharma" teachings. While these were to form the heart of the Palyul Nyingma school, many of these practices are of great importance in the Karma Kagyu lineage. Karma Chameh himself composed numerous works. Peter Roberts