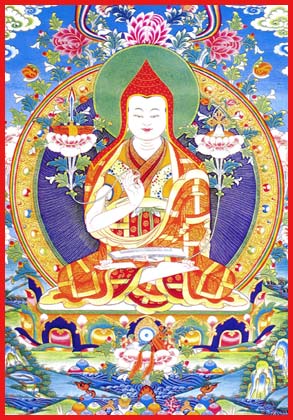 Dza Paltrül Rinpoche (1808-1887), was born in the Dzachuka valley of Eastern Tibet. Although he is generally considered to have been the speech incarnation of the great tertön Jigme Lingpa, Patrül Rinpoche was originally recognized as an incarnation of Palgé Tülku, a lama from Dzogchen Monastery. The first Dodrupchen Rinpoche, one of Jigme Lingpa's two main disciples, entrusted young Patrül with the Longchen Nyingthik lineage shortly after the recognition. He practiced, studied, and taught this lineage throughout his life. 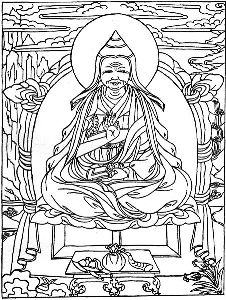 Patrül Rinpoche studied with many different masters. His two main teachers, however, were Jigmé Lingpa's second main disciple, Jigme Gyalwe Nyugu, and the great tantric yogi Do Khyentse Yeshe Dorje, the mind incarnation of Jigmé Lingpa. Under these and other important lamas, he studied a vast array of topics, from the foundational teachings of the Hinayana up to the most profound and secret oral instructions of the Great Perfection.

At the age of twenty, Patrül Rinpoche left the residence of his predecessor and took up the life of a wandering hermit. For the rest of his days, Patrül wandered from mountain retreats to large monasteries, practicing the teachings, instructing students, and composing commentaries on important texts and practices. Though he was master of the Great Perfection teachings, he had a passion for teaching the Mahayana as well. He taught Shantideva's Bodhisattva-caryavatara over a hundred times. Throughout his life, Patrül Rinpoche demonstrated the impeccable life of a true siddha/scholar; he kept few possessions, had no fixed abode, and was often mistaken for a beggar due to his humble appearance.

In addition to the many stories of his life and exploits, which remain a much treasured part of Tibetan Buddhist lore, Patrül Rinpoche's writings have proven to be some of the most influential in recent history. His texts range from scholastic tomes on Mahayana philosophy to pithy poems on how to apply Buddhist principles in daily life. In particular, his text The Words of My Perfect Teacher (Tib: kun bzang bla ma'i zhal lung), a commentary on the Great Perfection preliminary practices, is studied in all of Tibetan Buddhism's four main lineages. He also composed a profound commentary on The Three Words that Strike the Vital Point, known in Tibetan asTsigsum Nedek.

Patrül Rinpoche's heart disciple was Lungtok Tenpé Nyima, who lived with him for twenty-eight years. His other disciples include some of the 19th century's most outstanding masters. Among them were Mipham Rinpoche, Khenpo Künpal, the 3rd Dodrupchen Rinpoche, the famed tertön and teacher of the 13th Dalai Lama Lerab Lingpa, and Adzom Drukpa. Patrül Rinpoche died at the age of 80.