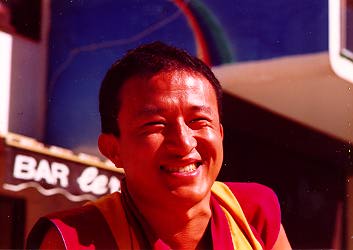 The present Dzongsar Jamyang Khyentse Rinpoche, Thubten Chökyi Gyamtso, was born in 1961. He was recognized by H.H. Sakya Trizin, and received empowerments and teachings from many of the greatest lamas of Tibetan Buddhism, including H.H. the Dalai Lama, H.H. the 16th Karmapa, and his own grandfather, H.H. Dudjom Rinpoche. His main guru was Dilgo Khyentse Rinpoche and further studied with more than 25 great lamas from all four schools of Tibetan Buddhism. While still a teenager, he was responsible for publishing many rare texts that were in danger of being lost entirely after the destruction of thousands of libraries in Tibet. He has established several colleges and retreat centres in India and Bhutan. As the political atmosphere in Tibet eased in the 1980s, he began the restoration of Dzongsar Monastery which had been completely destroyed during the Chinese Cultural Revolution. In accordance with the wishes of his teachers, he has travelled and taught throughout the world, establishing dharma centres in Australia, Europe, North America, and Asia. His organisation Siddharthas Intent organises Rinpoche's teachings, while Khyentse Foundation is dedicated to providing for the needs of Rinpoche's responsibilities.

In this time when the traditional structures of Tibetan Buddhism are facing challenges, and when Buddhism is reaching new audiences, Rinpoche is known for the freedom with which he moves between cultures and people, and his uncompromising dedication to bringing the philosophy and the path of enlightenment to anyone with an open heart. Details on Rinpoche’s activities and teaching programs can be found on siddharthasintent.org.