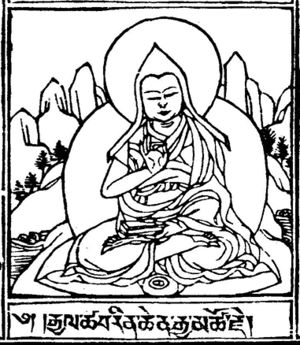 He was one of the two “regents” of Tāranātha’s, rgyal tshab kun dga’ rin chen rgya mtsho [17th cent.], who was a native of the snar thang region in Central Tibet, which is famous for the important bka’ gdams pa establishment of the same name with its equally reknowned printing press. He received ordination as well as all important transmissions from Tāranātha himself. He became especially adept in the practices of the Six Vajra Yogas of Kālacakra which he mastered fully. For fifteen years he served as Jetsün Tāranātha’s regent at rtag brtan dam chos gling. In his later years he retreated to gsang sngags ri bo bde chen and spent most of his remaining time in solitary retreat.