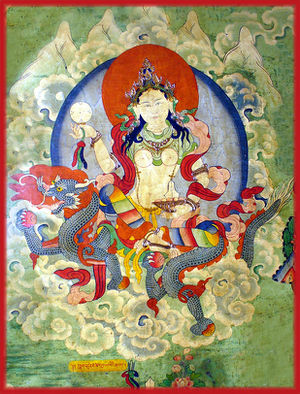 Jomo Yangri, a mural in the temple of Tharkegyang 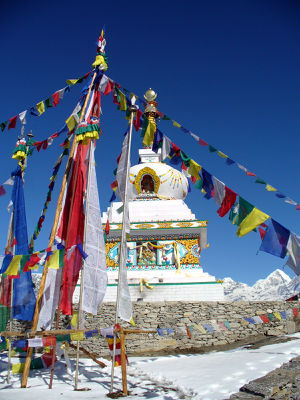 The stupa atop Mt. Yangri, above the village of Tharkegyang

The main local protective deity of the Hidden Land of Yolmo, lovingly called "Ama Yangri" by the people of Yolmo. While some very recent "scholarly" research calls this into question, this is certainly how she is treated by the local Yolmo people, and has been as far as memory reaches back. It merely shows once again that a professorship does not necessarily make a great scholar or researcher. She is considered to be an emanation of Tashi Tseringma, the main deity of the Five Sisters of Long Life, and is said to have served Jetsun Milarepa perfectly while he stayed in Yolmo for three years. While she is not mentioned explicitly by name in the Jetsun's biographies and collected songs, it is mentioned that the female protector of the region presented herself to him and served him well. All later masters agree that this was none other than Jomo Yangrima. The other three protectors of Yolmo are the well-known Dorje Legpa (rdo rje legs pa), as well as Genyen Leru (dge bsnyen gle ru) and Jowo Chati (jo bo cha ti), plus a host of lesser local deities. TSD