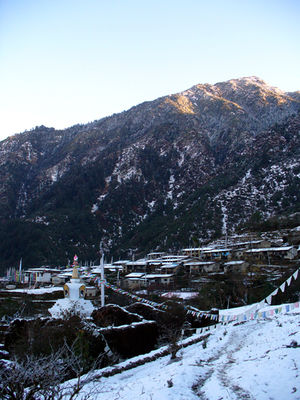 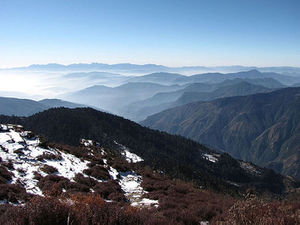 A view down, towards the Kathmandu valley 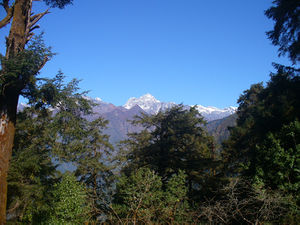 A view up, towards Langtang

yol mo gangs ra, the "Snow-enclosure of Yolmo"; also known as a so-called "hidden land" or sbas yul - under the name of sbas yul padma tshal; a mountaneous region in Nepal, not far from the capital Kathmandu and bordering on Tibet. One of the places in which Rigdzin Godem (rig 'dzin rgod kyi ldem phru can, 1337-1408), a famous early rnying ma gter ston, discovered many of his treasures or gter ma. This region has been prophesied by the Buddha in the Avatamsaka Sutra (mdo phal po che) as a sacred place that has been blessed by many previous Buddhas and Siddhas. In some of the old guides to Yolmo it is said that to do a single day of retreat in Yolmo, is as beneficial as doing a whole year of retreat in any other place on earth. There are various places associated with visits of Guru Padmasambhava, the most well known of which is the cave called Nyida Rangjung (nyi zla rang byung) above the village of Milam-khyim (Melamchigaon) and a self-arisen stone throne of his, surrounded by many miraculously formed rocks, simply known as the Shugtri (bzhugs khri). Not far from there one also finds the so-called Secret Dakini Cave (mkha' 'gro gsang phug), a cave where Guru Padmasambhava's consort Mandarava has meditated. The mountain one sees behind the village of Tharkegyang in the topmost picture on the right, is the seat of the local protective deity Jomo Yangri, one of the four main protectors of Yolmo. Above the village one finds the two retreat places of Drubpedrong (sgrub pa'i grong) and Gothang (rgod thang). Halfway up the mountain of Jomo Yangri and across the ridge known as Jomothang (jo mo thang), are two further retreat places at a location known as Lhagang (lha sgang). About three hours walk from the village of Tharkegyang is the retreat place named Neding, a long-time residence of Kyabje Chatral Sangye Dorje Rinpoche, where presently new retreat facilities are under construction. In Yolmo one also finds the famous practice cave of Jetsun Milarepa (rje btsun mi la ras pa) (1040-1123) known as Tagphug Senge Dzong (stag phug seng ge rdzong), one of the six so-called secret caves of his. For more information, see the Guide to the Hidden Land of Yolmo and A Praise to Yolmo Gangra by Kyabje Chatral Rinpoche. [TSD]