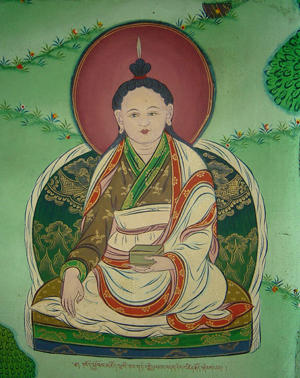 Rigdzin Gokyi Demtru Chen. Alias Ngodrub Gyaltsen (dngos grub rgyal mtshan), (1337-1408). The great treasure revealer of the Jangter Tradition. Among his termas are the Dzogchen teachings Kadag Rangjung Rangshar and the better known Gongpa Sangtal. When he was 12 years old three vulture feathers grew on his head, and five more when he was 24. He passed away at the age of 71 amidst miraculous signs. Rigdzin Godem means 'Vidyadhara Vulture Feathers.' [RY]

Ngödrup Gyaltsen, the great awareness-holder and treasure-revealer, was the reincarnation of Nanam Dorje Dudjom. Renowned as one of the three supreme emanations, along with Guru Chowang and Nyangral Nyima Ozer, they were emanations of Guru Pemakara. He was born, accompanied by the most extraordinary of signs, on Tuesday 11 February 1337 (tenth day, month of miracles, fire female ox year, sixth Rabjung), into the house of Namoring from Thoyor Nakpo, to the north-east of Mount Trazang.

He was the son of Lobpon Düdül, from a unbroken line of accomplished Vajrakila masters, descended from Mongol Lords. His father's family had estates given by Trisong Detsen's father to their ancestor for accompanying the king's Chinese bride, the Princess Chin-ch'eng, to Tibet and for later serving as a minister for religious affairs. In accordance with a prophecy, when Ngödrup Gyaltsen was in his twelfth year three vulture feathers grew from the crown of his head, and five when he was twenty-four. Therefore, he became universally known as Rigdzin Godem, “The Vulture Feathered Vidyadhara". During his youth he easily reached the limits of study, reflection and meditation upon all the Nyingma textual traditions of his forefathers.

And from Zangpo Drakpa of Manglam who discovered, in Gyang Yönpolung, eight doctrinal topics, including the Essential Inventory which Treats the Essence of the Esoteric Instructions in Seven Sections (snying byang man ngag gnad kyi don bdun ma). He realized that these were required as accessory texts for the treasures to be revealed at Lhadrak, so he offered them to the Rigdzin Godem, sending them through Tönpa Sonam Wangcuk, Having received the list on the summit of Mount Trazang, at the three stone pillars of Dzengdrak Karpo, he found the keys to a cache with three greater Termas and one hundred minor. At that place he re-concealed a substitute treasure.

At dusk on 14 June (fourth day, sheep month) of that same year [1366], in the cave of Zangzang Lhadrak, on the slopes of the rock mountain of Tukdrül Pungdra, Rigdzin Godem discovered a great profound treasury containing five terma caches within separate compartments of a blue, square chest. From the maroon core chamber in the center he extracted three yellow scrolls and three kilayas wrapped in maroon silk; from the white conch chamber to the east, the “Doctrine which Ascertains the Causal and Resultant Aspects of Deeds, of which the Intention is Vast as Space” (las rgyu 'bras la zlo ba'i chos dgongs pa nam mkha' dang mnyam pa); from the yellow gold treasure chamber to the south, the Doctrinal Cycle of the Four Aspects of Ritual Service and Attainment which is Luminous like the Sun and Moon (bsnyen sgrub rnam pa bzhi´i chos skor nyi zla ltar gsal ba); from the red copper treasure chamber to the west, the Doctrine of Auspicious Coincidence which is like a Sandalwood Tree ([[rten 'brel can gyi chos tsan dan gyi sdong po lta bu); and from the black iron treasure chamber to the north, the Doctrine which Pulverizes Enemies and Obstacles, and which is like a poisonous Plant (dgra bgegs thal bar rlog pa'i chos dug gi sdong po lta bu]]). In short, he found countless doctrines, the Penetration of Samantabhadra's Intention (kun bzang dgongs pa zang thal) foremost among them, and sacramental objects. Because each of the five treasure chambers held one hundred doctrinal topics, there were five hundred in all. He established their yellow scrolls, and those of their branches, and propagated them amongst worthy recipients. In this way, his doctrinal teaching pervaded all the regions of Tibet.

In later life Rigdzin Gödem went to Sikkim and revealed the gate to that sacred land. Chokdrupde, the king of Kungtang, revered him as his guru and by doing so promoted the happiness and felicity of Tibet. When Rigdzin Gökyi Demtrul Chen arrived at the culmination of his beneficial deeds for the teachings and beings, in his seventy-second year [1408], he dissolved his awareness-mind into the expanse of reality, discarding his body to the accompaniment of many wondrous and miraculous signs. 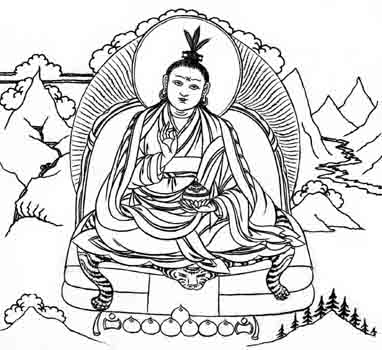