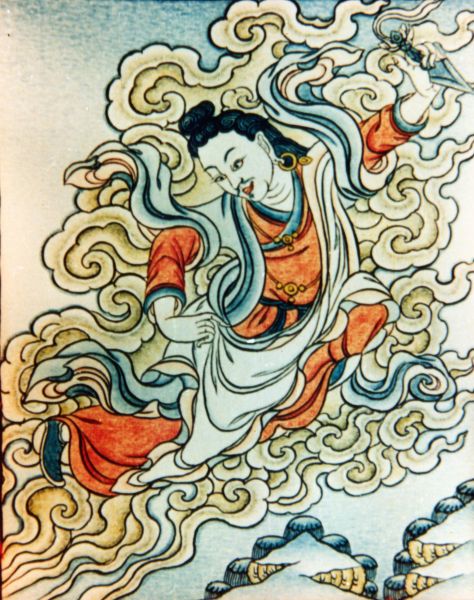 Dorje Dudjom of Nanam (sna nam pa rdo rje bdud 'joms). One of King Trisong Deutsen's ministers, sent to Nepal to invite Padmasambhava to Tibet. He became one of Guru Rinpoche's main twenty-five disciples. When receiving empowerment from Guru Rinpoche, his flower fell on the mandala of Vajrakilaya. A mantrika who had reached perfection in the two stages of development and completion, he could fly with the speed of the wind and traverse solid matter.

--
Nanam Dorje Dudjom was one of the messengers King Trisong Detsen had sent to India to invite Padmasambhava to Tibet. Upon his return from this trip, he became one of the King's close advisers and ministers as well as one of Padmasambhava's closest disciples. Practicing the sadhana of Vajrakilaya , his awakening was so complete that he could easily pass through solid rocks and transport himself from place to place instantly.

Padmasambhava gave many teachings to his disciples throughout his time in Tibet. The teachings received and destined to be discovered by Nanam Dorje Dudjom's future incarnation Rigdzin Godem were predicted to be important for future descendants of the King Trisong Detsen.