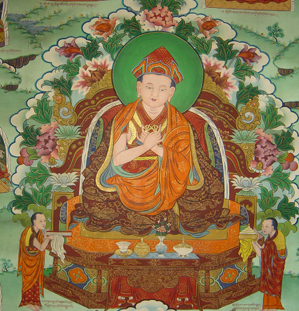 'Dordrag Rigdzin Chenpo; Pema Trinley (1641-1718), a reincarnation of Nanam Dorje Dudjom (sna nam rdo rje bdud 'joms) [RY]
--
Pema Trinley, Dordrak Rigdzin Chenpo IV 1641-1718 C.E. The fourth incarnation of Rigzen Godem was born in 1641 at Namse Ling. Yolmo Tulku Tenzin Norbu met him and enthroned him at Dorje Drak Monastery at the age of six as the incarnation of Rigdzin Ngagi Wangpo, giving him the entire teaching of the oral and treasure lineages. He also received ordination from the Great Fifth Dalai Lama Ngawang Lobsang Gyatso. After years of practice and study of both Nyingma and Sarma teachings, Pema Trinley discovered a few treasures of Padmasambhava but these appear to not have survived and his main contribution was in organizing and preserving the existing teachings. His main teachers were the Great Fifth Dalai Lama Ngawang Lobsang Gyatso and Choying Rangdrol. However, he received many teachings from other great masters such as Terchen Gyurme Dorje (Terdag Lingpa). 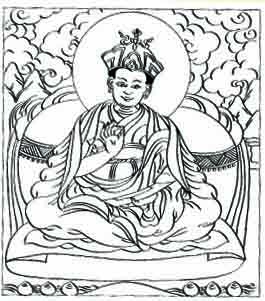 At the Dalai Lama’s inspiration, Pema Trinley composed a commentary on the Guyagarbha Tantra. He was also famous for teaching the Kalachakra Tantra as well as several Anuyoga texts. Since the time of Rigdzin Godem, the Northern Treasures had been maintained in three streams: one from Rigzen Godem’s consort, one from his son Gompo Namgyel, and one from his students originating with Gompo Dorje. These three streams of practices were collected and combined into one by Pema Trinley who also wrote volumes of commentaries on the original treasures. His commentaries on how to perform rituals for the Northern Treasures' Rituals are still those relied on in all centers and monasteries. In this regard, his kindness and help to the Northern Treasures is inestimable. His writings are the key that unlocks the Northern Treasures. They are well known for combining amazing depth of meaning with elegantly simple syntax so that everyone can understand, each at their own level. In this way, Taklung Tsetrul Rinpoche has written that Pema Trinley's commentaries are like giving sight to the blind.

1718 when the Dzungar Monglas invaded central Tibet. Dorje Drak was burned and many great masters were killed at that time including Pema Trinley. However, Pema Trinley’s work had laid a foundation making restoration of both the oral transmission and the treasure lineages inevitable.