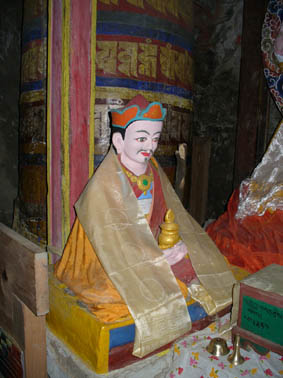 Yolmo Tulku Tendzin Norbu, a life-size statue kept in his seat in Yolmo, not far from Kathmandu

The third Gonjang Rinpoche or Rigzin Tenzin Norbu was born in 1598 A.D. in Kongpo kLung rGye dong (Tibet) son of Trinlay Wangchug a re-embodiment of Drubthob Ratna Bhadra and mother Kunzang Wangmo. He was recognized as the reincarnation of previous Yolmowa and know as the third Yolmo Tenzin Norbu. He was a renowned Nyingma Terton and had propagated the lineage and teachings of first Yolmo Tulku Ngagchang Shakya Zangpo. He was so active in the restoration work of Jarung Khashor. He maintained good relation with the Nepalese King. His root Guru was Rigdzin Ngagi Wangpo of Thubten Dorje Drag Monastery near Lhasa. He received all Nyingma Ka-Ter teaching especially about Jangter Transmission from his root guru and appointed as the regent of Thubten Dorje Drag Nyingma Monastery. He was a great scholoar. H.H. the Dalai Lama praised him for his knowledge and extra-ordinary deed towards the spreading of Buddha Dharma and offered him endowments for the support of his institution. His autobiography is available in two volumes. His special Tercho was about Vajra Kilaya Practice, a complete practice with Jin-sek (a fire sacrificial offerings) and Tor-Dhog etc. which is preserved till today.

yol mo ba sprul sku III bstan ’dzin nor bu (1589-1644), the third incarnation of sNgags-’chang Sakya bzang-po, was born in kong po at klu lnga rgyal grong. He was the son of rig ’dzin phrin las dbang phyug and lady Kun-bzang dbang-mo. While very young he recalled his previous incarnations, exhibited remarkable abilities, and had inspired visions. He was recognized by his former disciple Nyang Orgyen Dondrub, who subsequently became his teacher. Taking lay vows with zhva dmar pa chos kyi dbang phyug, he received the name kar ma thub bstan snying po rnam par rgyal ba’i sde. He relied on masters of the Karma and Drukpa Kagyu schools and lo chen 'gyur med bde chen. After completing his studies at nyin gling, he was invited by the ruler of yam bu to come to the kingdom of Nepal. There he once again consecrated and restored the great stupa of bya rung kha shor, just as he had in a previous life. He was honored and revered by the prince of gtsang when he gave Dharma teachings at ngam ring.

His main residence was the monastery of gcung ri bo che in western gtsang, founded by thang ston rgyal po. Since then, that monastery has continued to transmit the teaching lineage of bstan ’dzin nor bu’s younger brother, phyag rdor nor bu.

It was at sman thang that he met rig ’dzin ngag gi dbang po who empowered him as a holder of the Jangter tradition and cleared his mind of all mundane theorizing. Rigdzin Tendzin Norbu, thereafter became the chief disciple (‘heart son’) of Dordrak Ngagi Wangpo. Proceeding to mang yul, he established a retreat centre at ri bo dpal ’bar. Mang-yul is the huge area which includes the kingdom of gung thang and stretches to the west as far as spu hrang (mnga’ ris skor gsum). Prior to the 18th century it was also known as lower Ngari (mnga’ ris smad]]). The monastic estate at ri bo dpal ’bar had been bequeathed to rig ’dzin rgod ldem by khri mchog grub lde.

Engaging himself in profound meditation he received pure visions and predictions, on the basis of which he was able to take out further treasures from their place of concealment at rgyang yon po lung, the site from which the original key to the Jangter had been revealed. Upon his return to the central province, he was entrusted by his master with the care of Dorje Drak Monastery.

Later, in the Tara cave at rta-nag, Yol-mo sprul-sku bsTan-’dzin nor-bu received gter ma teachings from the dakini in pure visions, but he reached the end of his life without the conditions becoming suitable for bringing forth these treasures. His “collected miscellaneous teachings” (gsung thor bu) fill one volume.