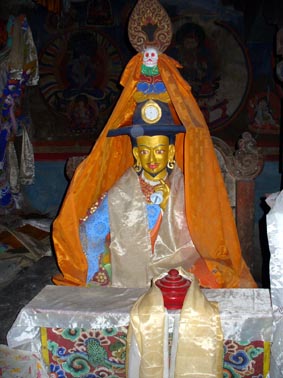 Ngagchang Shakya Zangpo, a life-size statue kept in his seat in Yolmo, not far from Kathmandu

Yolmo Tulku Shakya Zangpo 15th c. Shakya Zangpo was born in the southern region of Latod to a noble family of yogins. In Yolmo, a valley northeast of Kathmandu in Nepal identified by Buddha himself (in the mdo phal po che or Avatamsaka Sutra) as a naturally holy place, he found several treasures. . At Samye Monastery, he found a treasure text of Padmasambhava on the great stupa at Boudhanath. He also found teachings from King Songsen Gompo, the grandfather of Trisong Debsten and king of Tibet in the seventh century who is regarded by Tibetans as an incarnation of Avalokiteshvara.

Shakya Zangpo was the rebirth of the minister of Trisong Detsen and a disciple of Padmasmabhava. During that life, he had taken a vow to protect various holy places in the future. Shakya Zangpo is generally credited with excavating the original stupa which had become partly buried and creating the various levels surrounding the stupa.

He became the teacher of the Northern Treasures to Lekden Dorje and Ngari Padma Wangyel. Traveling to Western Tibet to spread the teachings there, he returned to Yolmo in his later years where he lived until the end of his life.

His seat there is still maintained. It is situated about twenty minutes walk below the village of Tharkegyang. Behind it, about half an hours climb, is Shakya Zangpo's retreat cave. It is presently occupied by a Nyingmapa monk who has done retreat there for the last ten years. 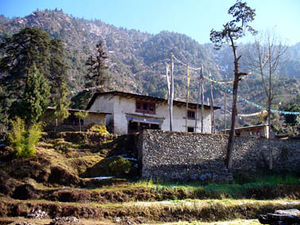 In his original seat in Yolmo, a clear footprint of his is kept on the shrine there. 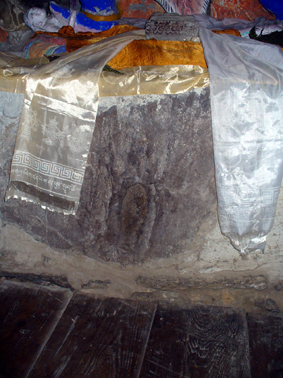 Footprint of Shakya Zangpo, kept in his seat in Yolmo.