Khampagar is the seat of the Khamtrul Rinpoches and formally the main monastic center of the Drukpa Kagyud followers in Kham, Eastern Tibet. It is devoted to the religious, cultural and artistic heritages of the lineage.

According to the lineage history, Pema Karpo was one the best-known Drukpa Kagyud lineage holders of his time in the early 15th century and was acknowledged as an emanation of Avalokiteśvara. One of his main disciples, Yongzin Ngawang Zangpo, had numerous disciples among whom 45 principle ones reached the level of realization where there was no distinction between meditating and not meditating - a skillful integration of meditation into mundane life. Of these 45 realized masters the three supreme disciples were Taktsang Repa, Khampa Karma Tenphel who was the First Khamtrul Rinpoche (1548-1627), and Kongchok Gyalpo (the First Dorzong Rinpoche). Karma Tenphel had many accomplished disciples. He founded Khampagar Monastery and related institutes in Kham, built retreat centers, branch monasteries and nunneries that were finally, through his later reincarnations, to number almost 200. One such branch of Khampagar is Trulshik Adeu Rinpoche's monastery. Khampagar is especially noted for their unique and highly authentic Tokden tradition. 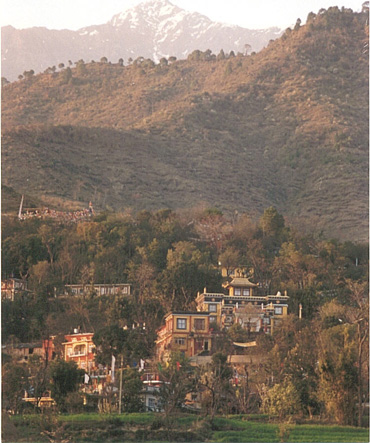 In 1958 the Eighth Khamtrul Rinpoche (Khamtrul Dongyu Nyima Rinpoche) decided to leave Tibet accompanied by a small group of sixteen lamas including some of his Tokdens, and tulkus. The Eighth Dorzong Rinpoche, then 15 years of age, was also in this group. Eventually Khamtrul Rinpoche established the Khampagar Monastery in India in the Kangra Valley of Himachal Pradesh in 1969. The extended community which followed Rinpoche out of Tibet also settled there on 34 acres of land which was named Tashi Jong. The monastery was completed in 1973. The Khampagar Monastery and Tashi Jong village form an interesting complex. The Tokdens and retreat centers are tucked away at the top of the hillside in the forest area, Khamtrul Rinpoche's residence sits neatly in the middle surrounded by his monastery buildings and stupas, and situated below is the supporting lay community and administrative offices.

Khampagar monastery's Gar Cham dance draws a consistent crowd. It is a tantric meditative dance practice where the practitioners dance in full costume according to a particular sadhana (ritual text). These Cham dances originated from visions of Guru Padmasambhava and his eight emanations which appeared to Kunga Tendzin (the third Khamtrul Rinpoche). Khamtrul Dongyu Nyima Rinpoche was an extremely acccomplished master of thangka painting (his noted student is his disciple, Dru-gu Choegyal Rinpoche and Robert Beer also studied under his guidance). It is no surprise that Khamtrul Rinpoche had an intense interest in preserving the artistic and cultural heritage of Tibet by encouraging and fostering arts in the community. For many years Tashi Jong had a carpet center and to this day many villagers still weave in their own homes. Master artist, Tsering Wanchuk, and his family run their own art school. A few expert wood carvers who followed Khamtrul Rinpoche out of Tibet still pass on their traditional skills to young apprentices.

Fulfilling the wish of the Eighth Khamtrul Rinpoche, his disciple Ani Tenzin Palmo established a nunnery in 2000. The present Khamtrul Rinpoche named it Dongyu Gatsal Ling Nunnery. It lies six kilometers from Tashi Jong and will eventually house 80 nuns from Tibet and other Himalayan regions who will engage in the strict study of the lineage as well as meditative practices.