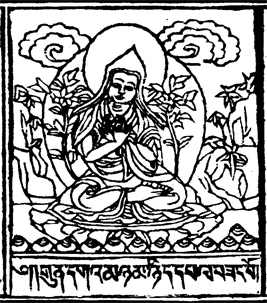 Kunga Palzang (kun dga' dpal bzang, 1513-1595) was born in Lo Montang in the Mustang region of modern Nepal. He was a nephew of Jetsun Kunga Drolchog. From his great-uncle, the Sakya master Drungpa Choje Kunga Chokdrup, he received novice ordination and many initiations and teachings. At age 19, he traveled to Tibet to take up serious studies. His first destination was the Sakya monastery of Serdogchen, the seat of Panchen Shakya Chogden. Eventually he continued onwards to Central Tibet. At Changlung Chöding he met the master Shönu Chödrup from whom he received many transmissions, in particular the complete teachings of Lamdre in the lineage of Panchen Shakya Chokden. At Chökhor Tse he also received the Lamdre from Panchen Dorje Gyaltsen. From this master he also received instructions on the six-fold vajra-yoga of Kalacakra according to the Jonang tradition. On top of that, he also received the Kalacakra traditions of Butön Rinchen Drup, Dampa Sönam Gyaltsen, and the Indian master Vanaratna. He practised these yogas extensively and achieved great realisation through them. Eventually, his teacher predicted, that he would benefit the teachings and beings immensely. At approximately age 25, Kunga Palzang traveled to his native Mustang. There he met his uncle, Jetsun Kunga Drolchog, and received from him many teachings and transmissions, in particular the Lamdre, the commentary on the Hevajra Tantra, the Cakrasamvara transmissions according to the lineages of the three Indian Siddhas Luipa, Ganthapa and Krishnacharya, as well as Raktayamari, Vajrabhairava, Vajrayogini etc. For all of these he fully received the empowerments, oral transmissions and liberating instructions. At that time he also received the complete transmission of the Shangpa Kagyu teachings and practices. Eventually Kunga Palzang returned to Tibet and served Kunga Drolchog for a number of years, traveling with him and receiving many more teachings from him. Returning again to Mustang, he was active there for many years, teaching and practicing. After the death of Jetsun Kunga Drolchog, Kunga Palzang was asked to become the next, 25th throne-holder of Jonang Monastery. He accepted the responsibility and transmitted the Kalacakra and its six-fold vajra-yoga to a large number of students. During a personal retreat there, he had a vision of his uncle Kunga Drolchog, who smiled radiantly and presented him with a golden wheel. Kunga Palzang renovated Jonang monastery extensively. For many years Kunga Palzang traveled and taught extensively. In particular he transmitted the Jonang tradition of the Kalacakra and the Shangpa teachings again and again. He eventually invited the young Tāranātha, who had been recognized as the rebirth of Kunga Drolchog, to Jonang. He returned the seat of Jonang to Tāranātha and gave him many teachings and empowerments, in particular the six-fold vajra-yoga of Kalacakra, the Vimalaprabha commentary on the Kalacakra Tantra, and the Shangpa teachings of the Six Doctrines of Niguma. At age 83, Kunga Palzang informed his students that he had had a vision of Kunga Drolchog early that morning. He proceeded to perform all his personal practices, and then passed away peacefully by way of performing the transference of consciousness according to the Six Doctrines of Niguma.