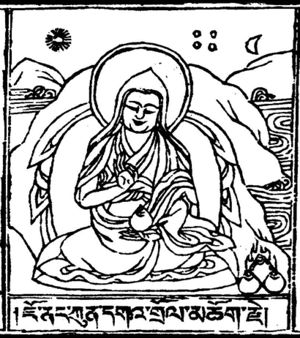 Jetsün Kunga Drölchog was both a Sakya and Jonang master and one of the 16th century's greatest non-sectarian teachers of Tibet. A true forerunner of the later Rime movement. His full name is stated by Jonang Tāranātha as "Drubpe Wangchug Jetsün Kunga Drölchog Losal Gyatso De". He was born in Ngari Möntang, which is the small kingdom of Mustang in present-day Nepal. At the time of his birth, the Fire-Rabbit year of 1507, his father was 56 years old, his mother was 20. His clan was that of the Ösal Lha. When he was born, a 100.000 repetitions of Tara's praises were being accumulated. Keeping the compassionate activity of Tara in mind, he was therefore initially named Drölma Bum. In his childhood he was sick a lot. His parents were very respectful of the teachings of the Buddha and had him begin his studies at age four, under the holy Lama Kunga Chogdrub. From this master he received the vows of a layperson. Until he was eight years old, he learned reading and writing from his father. At age 13 he received novice ordination from Lama Kunga Chogdrub, as well as many teachings on both sutras and tantras. Eventually he strongly wished to go to Central Tibet to further his studies. On his way to Sakya, he had three different visions of Gorum Dorje Nagpo Chenpo (Gorum - a famous Mahakala temple at Sakya. Enshrined in it was a sacred Mahakala mask, brought from India by the translator Rinchen Zangpo, and presented eventually to Sachen Kunga Nyingpo). At Kha'u Dragdzong he then received the permission blessing for this glorious protector from Chöje Künpang Chökyi Nyima. The protector's appearance then became increasingly clear. Kunga Drölchog eventually arrived at the famous monastic university of Serdogchen, where he received many teachings on sutra and tantra from the Pandita Dönyö Drubpa. In particular he received the empowerments for the Deities of the Five Tantra Classes, as well as for the Five Deity Cakrasamvara practice of the Shangpa Kagyu tradition. He then returned to his native land of Ngari for a while. At age 20 he received his Khenpo degree from the all-knowing master Sönam Lhündrub Legpa'i Gyaltsen. He was made the assistant preceptor of Ngorchen Dorje Lhachog. At this time he also received many instructions on the Sakya teachings of Lamdre, or The Path and its Result. From Lama Palden Tsültrim he received the complete teaching cycle of Vajrabhairava. At around this time Kunga Drölchog beheld a pure vision of the Jnanadakini Niguma. During this vision he received from her the transmissions for her Six Doctrines, Mahamudra, the Three Carry-overs, Deathlessness, the White and Red Kechari, the Six-armed Protector and many other instructions. The dakini said to him: "Now you do not require any other transmissions!" From Sönam Gyaltsen, a teacher from Kham, he received the ancillary practices of Niguma, as well as further Mahamudra teachings. At Dragteng Dorje Dzong he beheld a vision of Vaishravana and his retinue of eight horsemen. In his dreams he met with the Mahasiddha Mitradzoki and received from him explanations of the three teachings on the essential meaning. In another dream he met with two red girls, who sat him in a palanquin and told him they would take him to the Sosaling cremation ground (in India). There he met again with Niguma, who was presiding over a ganacakra ritual, amidst many dakinis. He received her blessing and many symbolic instructions. The two red girls then escorted him back (to Tibet) to his sleeping quarters, where he immediately awoke. In the same way he met with Shavaripa and other masters, and received many teachings and symbolic instructions from them. All in all he studied under more than 40 masters, such as Jamyang Sönam Lhündrub, Sangye Rinchen Senge, Kunga Chogdrub, Pandita Dönyö Drubpa, Palden Drukpa Ngawang Chögyal, Changlungpa Shönnu Chogdrub, the great Taklungpa Tashi Namgyal etc., to name just a few. From all of these masters he received teachings and empowerments, oral transmissions and liberating instruction on many sutras and tantras. In particular, from the Hidden Yogin Gyagom Legpa Gyaltsen he received the full transmission of the twelve lineages of Niguma's teachings, like the contents of a flask poured into another. From various other teachers he received the transmissions of yet again other lineages of Niguma's teachings, and thus became the holder of all the twenty-four extant Shangpa transmission lineages of his time. Kunga Drölchog became an avid practitioner of the Six Doctrines of Niguma, which he reportedly passed on to other masters and students more than a hundred times. He became one of the greatest masters of his time and periodically occupied the lion-thrones of such prestigious institutes as Thubten Serdogchen, Palkhor Dechen and Tsechen Ngamring. Kunga Drölchog was thus a holder and propagator of the ocean-like teachings of the Sakya, Jonang, Kagyu and Shangpa lineages. He later became the 24th throne-holder of Jonang monastery and one of the main propagators of the Dro lineage of Kālacakra. Among his main students were such great masters as his own nephew Kunga Palzang, Lochen Gyurme Dechen, Chöku Lhawang Dragpa, Kenchen Lungrig Gyatso, Doring Önpo Kunga Gyaltsen and Jamyang Lhündrub, to name just the most important ones. Having eventually dissolved his bodily form into the dharmadhatu, his physical remains and the relics emanating from them were enshrined at Chölung Jangchub Tsemo. After a short-lived rebirth as the Indian prince Rama-Gopala (rgyal sras dga' byed sa skyong), he incarnated as the illustrious Jonangpa master Jetsün Tāranātha.