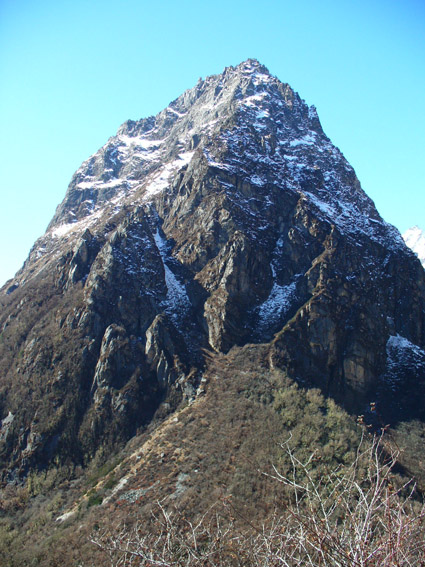 One of three sacred moutains surrounding the sacred site of Lapchi. Considered to be the palace and seat of Vajrapani. The Guidebook to Labchi, by the 34th throne holder (gdan rabs) of the Drikung Kagyu, Tendzin Chökyi Lodrö (1869-1906), composed in 1901, relates a story about how Jetsun Milarepa wished to climb this mountain one day. His students tried to talk him out of it as he was elderly already and they feared for his safety. To which the Jetsun replied (probably with a mischievous smile on his face):

Since I, Mila, wish to go to the mountain's peak,
but I am old and unable,
due to the four elements being infirm,
inanimate mountain, bow your head gently!


As soon as Milarepa had spoken these words the mountain bowed its peak and the Jetsun placed his feet upon it. Then the mountain rose upward again. Milarepa remained on the summit for a short while, in a radiant sphere of scintillating rainbow lights, and then came flying down again like a bird, much to the utter amazement of his dumbstruck students... [TSD]