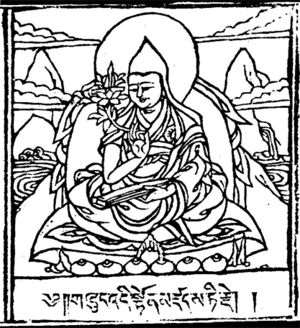 Khenpo Lodro Drakpa (1920-1975) was one of the most influential and prolific modern Jonang masters. Born in the Bukhangda district of Amdo, Khenpo Lodrak was the son of the nomads Tsewang Pal and Gyalza Gurlo. At the age of 9, he began to learn the Kalachakra system at Darnga Mountain Retreat (ri khrod) in Dzamthang under the guidance of Dzam-ngos Dorje Chang Kunga Ngawang. The following story is told about this:

Lodro Drakpa arrived at the Darnga Retreat with a friend of the same age. Dzam-ngos Kunga Ngawang didn't want children in the retreat center, so he told them that they could only enter on the condition that they learned the sizable volume of the liturgy for all the practices in the retreat by heart over night. He gave them both a copy of the big text and left. Lodro Drakpa actually did just that, thus greatly astounding Dzam-ngos Kunga Ngawang and forcing him to keep his promise.

Then, when he was 18 years old, he began to study the works of Bamda Thubten Gelek Gyatso at Rashug Mountain Retreat under Bamda's direct disciple Tsoknyi Gyatso.

At the age of 21, he took up residence at Dzamthang Tsangwa Monastery. Studying primarily with Rabka Lama Lozang Tsultrim, he was immediately recognized for his scholastic talents. Later in his life he was known as a "second Mipham Rinpoche," praised for his intellectual similarities parallel to the famous Nyingma master from Kham, Mipham Gyatso. Within the Jonang, he was also regarded as an incarnation of Dolpopa.