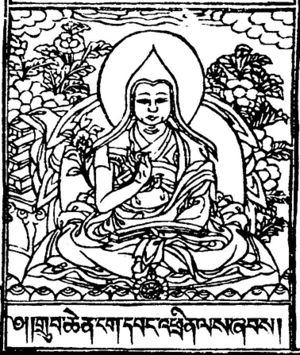 Ngawang Thrinle (1657-1723) was a jo nang master from a place called cha lung in Central Tibet, the first in an incarnation lineage known as the gtsang ba ‘gab ma yag mdo’i sgar, referred to as a Mahāsiddha and often simply called cha lung pa. He met Lodrö Namgyal (mkhas grub blo gros rnam rgyal), who was his paternal uncle, when he was sixteen and received ordination from him. Later he received the Kālacakra empowerments from him and instructions on development- and perfection-process meditations for the same. ngag dbang phrin las served his uncle until he was twenty-four years old. Then blo gros rnam rgyal passed away. While in solitary retreat he practiced the yogas of dream and clear light and one night in a dream, he actually travelled the Wu Tai Shan or ri bo rtse lnga and beheld the five deity mandala of Manjushri in actuality. In his later years he received the transmissions of many teachings of the rnying ma, dge lugs, sa skya, shangs pa bka’ brgyud and ‘brug pa bka’ brgyud schools.

Most of this information and some of the images are taken from the Jonang Foundation website. See link below.