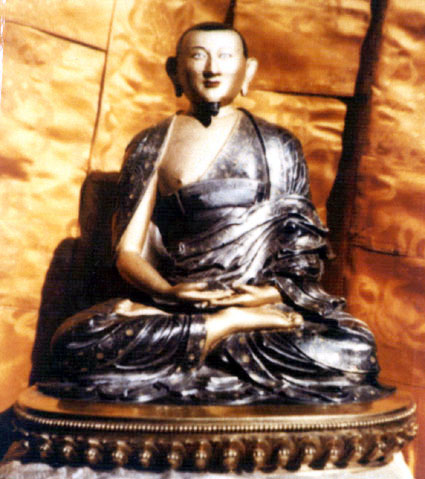 The 1st Sangye Nyenpa Rinpoche. Also known as Denma Drubthob ('dan ma grub thob) or Denma Drubchen ('dan ma grub chen). A great and important lineage master of the Kamtshang or Karma Kagyu tradition. At the age of six, he met the 7th Karmapa Chödrag Gyatso in whom he developed extraordinary faith. From him he received the name Tashi Paljor. At the age of eight, he received novice vows (later on the full ordination), empowerments and profound instructions from the Karmapa and studied all the outer and inner sciences with great diligence under the guidance of both Bengar Jampal Sangpo (ban sgar 'jam dpal bzang po), (15th-16th cent.) and Geshe Paljor Döndrub (dge bshes dpal 'byor don sgrub) (1427-1489), the 1st Gyaltsab Rinpoche.
For seven years he did not part from Karmapa Chödrag Gyatso and received the complete transmission of all empowerments and instructions of the Karma Kagyu lineage from him. The Karmapa then instructed him to meditate for three years at Kampo Nenang (kam po gnas nang), for two years at Tsurphu (tshur phu), for two years at Palpung (dpal spung) and for one year in the Tangla mountains (thang la). It is said, that for these eight years he relied solely on the "food of meditative absorption". After that he spent another five years meditating in seclusion on the Semodo island (se mo do) in the great lake known as Namtsho (gnam mtsho). He became the root teacher of the young 8th Karmapa Mikyö Dorje (1507-1554), who had a clear vision of the protector Mahakala, telling him to take Sangye Nyenpa as his guru.
When Tashi Paljor was 43 years old, he stayed in his native place of Denma ('dan ma, 'dan yul). At one time he stayed on the top floor of a four storeyed building, when a great earthquake occured. Instead of being killed and buried under the rubble, he flew up into the air and escaped unharmed. Many people witnessed this and since this time he was called Denma Drubthob, or "Mahasiddha of Denma". He passed into Nirvana at the age of 65. According to H.H. Dilgo Khyentse Rinpoche, Sangye Nyenpa Tashi Paljor's "emanation basis" (sprul gzhi) is the future Buddha Maitreya. He is also considered to be an emanation of the Indian master Jnanagarbha (ye shes snying po), one of the teachers of the great translator Marpa.
The picture shows a precious silver statue of Tashi Paljor that is kept in Tsurphu, the Karmapa's seat in Central Tibet, known as "the silver statue [that floated] in midair", (dngul sku bar snang ma). It was made by the 8th Karmapa and is said to have floated in the air for seven days after the Karmapa had consecrated it. It contains some hair, bone fragments, pieces of the clothes and relic pills (ring sel) of Sangye Nyenpa Tashi Paljor and is said to have great blessings and powers. Ven. Benchen Tenga Rinpoche says that often rituals for the sick are performed in front of this statue. If the sick person will live, the eyes of the statue will look upwards into the sky. If the person will die, then the statue's eyes will look downwards. During the destruction of Tsurphu the statue was saved and buried on the mountain behind the monastery by one of the Tsurphu monks. Decades later, after the Tsurphu monastery was rebuilt, the same monk searched for a long time and eventually found the statue again. It is now enshrined in Tsurphu in a large silver reliquary (ga'u) as one of the most precious relics of the Karma Kagyu lineage.