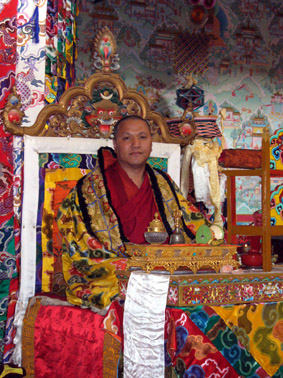 Sangye Nyenpa Rinpoche (sangs rgyas mnyan pa rin po che). H.E. the 10th Sangye Nyenpa Rinpoche was born in 1964 near Paro Taktsang in Bhutan. He is the 10th incarnation of the famous "Drubthob Sangye Nyenpa Tashi Paljor" (1457-1525), who was among the closest disciples of the 7th Karmapa Chodrag Gyatso (1454-1506) and the root guru of the 8th Karmapa Mikyo Dorje (1507-1554), and was recognised as such by H.H. the Rangjung Rigpe Dorje. Sangye Nyenpa Rinpoche was brought to Rumtek monastery at an early age and was inthroned there by H.H. the 16th Karmapa himself. Rinpoche was brought up there by the Karmapa, Ven. Benchen Tenga Rinpoche and many other masters and had a particularly close relationship with H.H. Dilgo Khyentse Rinpoche. The previous 9th Sangye Nyenpa Rinpoche, who passed away in Rumtek in 1962, had been H.H. Dilgo Khyentse Rinpoche's older brother.
At the age of five he began his studies under these and other masters and received many teachings and transmissions from them. When the "Karma Shri Nalanda Institute of Higher Buddhist Studies" was completed and inaugurated in Rumtek, Sangye Nyenpa Rinpoche was among the first to enroll there as a student. He completed the full 10-year study program and obtained the title of an Acharya. Following his studies there he stayed on for another three years as a teacher of the institute. Nowadays Sangye Nyenpa Rinpoche is one of the most learned young Rinpoches in both philosophy and tantric rituals. He travels extensively in South-East Asia and occasionally in Europe.

In recent years he has, together with Ven. Benchen Tenga Rinpoche, restored his traditional seat in Nangchen, the great Benchen monastery, which was originally founded by the 4th Sangye Nyenpa Rinpoche. Another of Rinpoche's projects was the construction of a monastic university, or "Shedra", in Pharping near Kathmandu, which has been completed and inaugurated in early 2007. Rinpoche plans to spend much of his time there teaching. The Shedra is situated close to the three-year retreat center of Benchen monastery in Nepal, which is being looked after both by him and the Ven. Benchen Tenga Rinpoche. On the 15th day of the new Tibetan year, 2006, the third three-year three-fortnight retreat began there under both Sangye Nyenpa Rinpoche's and Tenga Rinpoche's guidance. This retreat, as previous ones, was concluded successfully. The fourth Benchen three-year retreat began in early 2010. A new three-year retreat center, particularly for the practices of the Shangpa Kagyu tradition's teachings is currently under construction.

Information about Rinpoche's recent and future activites can be found at his website: SangyeNyenpa.com and also at the Benchen.org website