One of the thirteen taktsang, or "Tiger Lair", sacred caves in Tibet and Bhutan blessed by Guru Padmasambhava and the seventh of the eight sacred places in Tibet and Bhutan he blessed for the practice of the Eight Classes of Herukas (sgrub pa bka' brgyad). In particular this is the place related to Jigten Chöto ('jigs rten mchod bstod), where Langchen Palseng (rlangs chen dpal seng), attained realization. 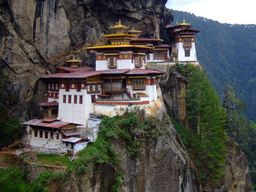 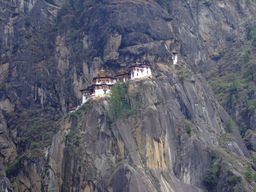 In the 8th Century CE Guru Rinpoche visited Bhutan and blessed it as the second Kailash. At that time malignant spirits abounded and, in order to subdue them, he assumed the terrifying form of Guru Dorje Dröllo one of the Eight Manifistations of Guru Rinpoche (gu ru mtshan brgyad) and consecrated Paro Taksang as a sacred site to protect the Dharma and subdue harmful forces.

According to the Namthar Yid kyi Munsel (གུ་རུའི་རྣམ་ཐར་ཡིད་ཀྱི་མུན་སེལ།) Padmasambhava spent four months meditating in a cave at Taktsang taming and subjugating the eight classes of malicious spirits. He concealed many profound treasures at Taktsang.

While confering the empowerments of the Eight Classes of Herukas Cycle to the Twenty-five Disciples at Yamalung, Guru Rinpoche instructed Langchen Palgyi Senge (rlangs chen dpal gyi seng ge) to carry out the practice of the Fierce Mantra of the Tamer of All Haughty Spirits at Taksang Senge Samdup in the Paro valley of Bhutan.

In accordance with these instructions Langchen Palgyi Senge came to Paro Taksang in 853 CE meditating until he accomplished the practice of the "Tamer of All Haughty Spirits" gaining profound siddhi which enabled him to bind gods and spirits to his service.

The cave in which he meditated became known as Pelphug or Drubphug.

The collection of Milarepa's songs compiled by Lhatsun Rinchen Namgyal (1473-1557) records that Milarepa visited Taktsang where he meditated for three months. Following his retreat he encountered four ascetics to whom he sang a song explaining the ten signs of his attainment.

Phajo Drukgom Zhigpo (1184-1251), the Lama who originally established the Middle Drukpa Kagyu school in Bhutan, meditated for a time at Taktsang. In a clear vision he was instructed by Guru Rinpoche to meditate at twelve places in Bhutan: four dzongs, four crags and four caves. Senge Phug at Paro Taktsang is counted as one of the four caves.

In 1433, Drubthob Thangtong Gyalpo and his disciples traveled south to Phari in the Chumbi valley. There the deities Jomolhari (jo mo lha ri), Dorje Drakye (rdo rje drag skyes) and Chungdu (khyung bdud) requested him to come to the southern land of four approaches, so they traveled to the Paro valley. There they stayed at Paro Taktsang Senge Samdrup. While performing rituals of Vajrakilaya, in the cave of Senge Phug the Drubthob had a vision of the assembly of the Eight Classes of Heruka (sgrub pa bka' brgyad) meditation deities with Vajrakumara (rdo rje gzhon nu) as the central deity.

The nine headed Naga, who was the gnas bdag custodian of Taktsang, then said to him, “as your religious inheritance was concealed here by the great Ugyen Rinpoche, please make your discovery and reveal it”. Thereupon Drubchen Thangtong Gyalpo extracted a sacred scroll ten spans long from the cliff of Taktsang, the terma of Mengak Domchu (མན་ངག་འདོམ་བཅུ་མ།).

The row of mountains where Taktsang is located, ends in the middle of the Paro valley and resembles a black poisonous snake. On the nose of this snake Drubthob Thangtong Gyalpo constructed a stupa shaped temple called Dumtseg Lhakhang (zlum brtsegs lha khang). After completing the stupa, he pronounced that all diseases caused by the evil spirits residing under the ground were suppressed and the valley would be free from leprosy. 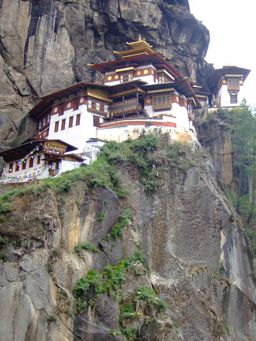 There are seven chapels within the present temple complex:

The key to the sacred site of Taktsang is at Shama Lhakhang (gsha' ma lha khang). Although Shama is very close to Taksang one must ascend to Urgyen Tsemo at the top of the cliff and then descend through a small ravine to reach Shama.

Consruction of the Temple

The first known temples at Taksang Pelphug and Shama were built in about 1508 by Sonam Gyaltsen a Nyingma lama belonging to the Kathog lineage who was invited from Tibet by Taksang Lama Nganggyu (ngang rgyud). Lama Sonam Gyaltsen resided at nearby Urgyen Tsemo temple above Taksang, which had been established by his uncle Kathogpa Uwo Yeshe Bum (kaH thog pa ye shes 'bum) . Sonam Gyaltsen transmitted the whole Nyingma Gyubum to his disciples. The shrine of Taksang remained in the care of his family lineage until the 17th Century.

In 1645 Shabdrung Ngawang Namgyal visited Taktsang with his Nyingma teacher Rigdzin Nyingpo, a descendant of Terton Sangye Lingpa, and at that time the temple was offered to him.

Those who wish to go on pilgrimage to Paro Taktsang and nearby sacred sites, should obtain a special permit from the Department of Culture, Ministry of Home & Cultural Affairs, Thimphu. In order to maintain the sanctity of the place, ordinary tourists without a permit may not be allowed to go beyond Tsogyal Pangchung (meadow of Yeshe Tsogyal) before the Shelkarchu waterfall. At that place there is however an excellent view of Taktsang and a place to offer butterlamps.

The complete pilgrimage to Taktsang consists of an outer (), middle () and inner() pilgrimage: