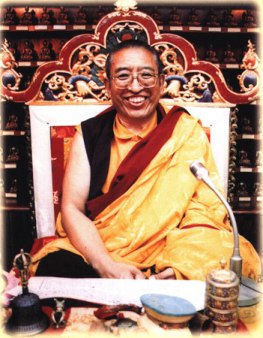 'Khenchen Thrangu Rinpoche' is one of the foremost teachers of the Kagyu lineage of Tibetan Buddhism. As well as being the senior scholar of the lineage he was given the degree of Geshe Rabjam, the highest scholastic degree, by the Dalai Lama. He is also an acknowledged master of Mahamudra meditation.
Thrangu Rinpoche is the ninth reincarnated of the Thrangu lineage. The 7th Karmapa recognized the first Thrangu tulku as the emanation of Palgyi Senge, one of the twenty-five disciples of Guru Rinpoche. Given the name, Thrangu Rinpoche, he was then established by the Karmapa in his own monastery, Pal Thrangu Tashi Choling, in the eastern region of Tibet know as Kham. The monastic college for higher Buddhist studies there became one of the great seats of learning in Tibet. The famous scholar, Mipham Rinpoche stayed there for some time.
Thrangu Rinpoche escaped from Tibet after the invasion by China, finally reaching Rumtek Monastery in Sikkim where the l6th Karmapa had settled after leaving Tibet. The Karmapa appointed him Chief Abbot of Rumtek Monastery and the Nalanda Monastic College. Thrangu Rinpoche is presently the main teacher of the 17th Karmapa, Orgyen Thinley, and was teacher of the four regents of the Kagyu lineage and many of the Kagyu tulkus.
Presently, Thrangu Rinpoche's main residence is the monastery which he established Boudhanath, Nepal by the great Stupa of Boudhanath. Rinpoche now has his own monastic college at Namo Buddha that is located in the mountains near Kathmandu. Also at Namo Buddha is a retreat center, Thrangu Dharmakara Publications, a school for young monks, and a temple that is under construction. Rinpoche also founded Thrangu Tara Abbey, a nunnery near Kathmandu, a school for children of Tibetan and Himalayan cultures in Boudhanath and The Vajra Vidya Institute for Buddhist Studies in Sarnath, India, where the Buddha gave the first cycle of teachings. Thrangu Monastery in Tibet is being rebuilt and now has a monastic college and retreat centers. Thrangu Rinpoche is founder of many Buddhist centers and foundations in the West, Southeast Asia, Hong Kong and Taiwan.

may these good qualities spread throughout space.

May your lotus-feet remain firm, and may your activity of teaching

and practice be victorious in all directions and its glory shine forth."