Difference between revisions of "Virupa" 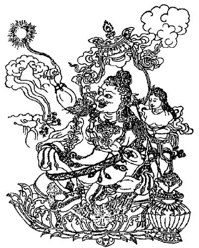 Virupa
བིར་ཝ་པ།
(bir wa pa), one of the Eighty-four Mahasiddhas of India, was born into a royal family one thousand and twenty years after Lord Buddha entered parinirvana. He took novice monk vows and entered the Nalanda monastery, of which he became abbot later. He perfected his disciples of study and meditation. However, after seventy years of one-pointed tantric practice he had not attained any siddhis of any kind, and actually negative events were happening in his life. He decided he had no connection with the tantric teachings, Vajrayana, and with this state of mind he threw his rosary into the toilet and stopped doing Deity Meditations.

However, the same night Nairatmya manifested for him, and said:

Noble son, do not act in this way. Pick up your rosary, clean it, and take up your practice again. I am the deity which whom you have a karmic connection to, and I will bestow my blessings upon you".

The following evening Nairatmya appeared to him again in her own mandala of fifteen goddesses, and she bestowed upon him the four specific empowerments, and he reached the first bodhisattva bhumi level including the Path of Seeing. On the evening of the twenty-ninth day he became a bodhisattva of the sixth bhumi. The monastic community at Nalanda monastery knew that something strange happened, but they were dubious about the strange behavior of Virupa, and he left the monastery.

This Virupa, the human originator of the Lamdre teachings of the Sakyapa school is however NOT the teacher of the awareness dakini Sukhasiddhi, whose teachings became important in the Shangpa Kagyu tradition. Sukhasiddhi's Virupa is known as the Eastern Virupa (shar phyogs bir ba pa) or Virupa the Younger (bir ba pa phyi ma), and was a master of various Vajrayogini tantras, particularly of the aspect known as "dbu bcad ma - severed head", which never became very popular in the Tibetan traditions. According to Taranatha's "bka’ babs bdun ldan gyi brgyud pa’i rnam thar ngo mtshar rmad du byung ba rin po che’i khungs lta bu’i gtam" this latter Virupa was a student of the older Virupa.