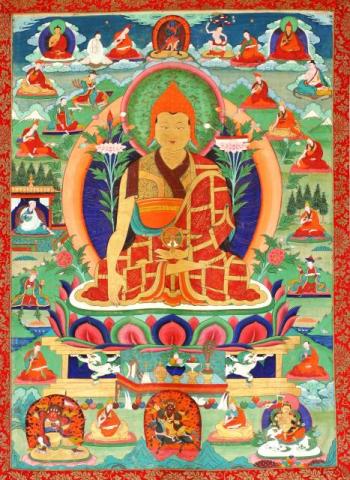 Jonang Jetsun Taranatha (1575-1635), one of the most important masters of the Jonang lineage. At the same time he was of crucial importance for the Shangpa Kagyu tradition.


He was the last great throne-holder at Jonang monastery in Central Tibet, before its forced conversion to the Gelugpa tradition several years after his death. Taranatha, also known as Kunga Nyingpo, was a successor to the reincarnation lineage of Jetsun Kunga Drolchog. He received the entirety of major transmissions from the Kadam, Zhalu, Sakya, Shangpa Kagyu and Karma Kagyu traditions, and was an expert on the tantras from the later translation period (gsar bsgyur). He received the Dro lineage of the Kalachakra from his teacher Kunga Palzang (a nephew and student of his former incarnation Kunga Drolchog) at Jomonang, and the transmissions according to Buton's Zhalu Rwa tradtion from Kenchen Lungrig Gyatso. It was this master who recognized him as Kunga Drolchog's incarnation. Most of the Shangpa transmissions he received from Chöku Lhawang Dragpa, and much of the Lamdre transmissions of the Sakyapa school came from Doring Önpo Kunga Gyaltsen, all three also former students of Taranatha's predecessor.

Another important teacher of Taranatha's was the Indian Mahasiddha, scholar and traveller Buddhagupta-natha, whom he met near Narthang in Tibet when he was only fourteen years young. From him he received a number of transmissions which had not previously appeared in the land of snows. Among them were the transmission of the tantras and instructions of Tarayogini, the Guhyasamaja according to the tradition of Jnanapada, the Dohas of Jalandhara, Varahi according to the tradition of Jalandhara, the Oral Instructions of Kusali and its Six Branches on the perfection process for Hevajra, and several heretofore unknown Mahamudra instructions, to name just a few. Taranatha composed a wonderful biography of this outstanding master, which is contained in his Collected Works.

As one of the most prolific authors in the Jonang tradition, his 23 volumes of collected works encompass topics on history, tantric ritual practice, zhentong thought, autobiography, pilgrimage, astrology, medicine, meditation, etc. One of his most well-known historical works is his famous "History of Buddhism in India", a delightful mixture of anecdotes about the lives of many Indian Mahasiddhas, as well as historical and geographical information. Available in English translation, it is one of the major sources for the study of Indian Buddhism for students from all over the world even today. Other important historical works of his are his histories of the Kalacakra-, Yamantaka- and Tara-tantras.