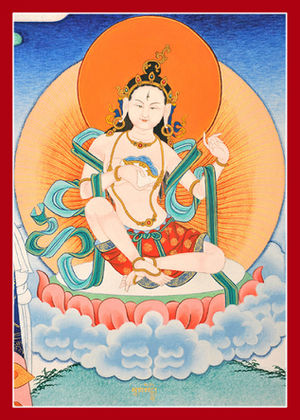 A dakini who was not only instrumental in the transmission of the Mahamudra teachings, but is of especial importance to the Shangpa Kagyu lineage. She was one of the main teachers of their founder Khyungpo Naljor (khyung po rnal 'byor, 11/12th cent.).


The woman who was to become known as Sukhasiddhi eventually, was born in Western Kashmir and was a wife and mother of three sons and three daughters. She was a kind and generous lady and would give what she had to those who were more destitute. One day, when the family had only one pot of rice left to eat, her husband and children went in different directions in search for food, leaving Sukhasiddhi alone at home. When an even more destitute man knocked upon her door begging for food, Sukhasiddhi, assuming her husband and children would return with more food, offered him the only food the family had left. When her husband and children came back without having found any food to eat and learned that Sukhasiddhi had given the last of their food to a beggar, she was chased out of her house because of her generosity. Sukhasiddhi left Kashmir and headed west for the country of Uddiyana, of which it was said that all the men were dakas and all the women were dakinis. Upon arriving there, after begging for a while, she obtained a bag of rice and became a beer merchant. A yogini came every day to buy beer from Sukhasiddhi for her master and Sukhasiddhi asked her whom she was taking this beer to. The yogini answered that whe was taking it to the Great Yogi Virupa who lives in the forest. (It must be noted that this Virupa is NOT the famous master who is the originator of the Lamdre teachings of the Sakyapa school! Sukhasiddhi's Virupa is known as the Eastern Virupa [shar phyogs bir wa pa] or Later/Younger Virupa [bir ba pa phyi ma] and was a master of various Vajrayogini tantras, especially of the Severed Head Vajrayogini [dbu bcad ma]. Some of his works on a longevity practice known as "Amritasiddhi" remain in the Tengyur. Interestingly, a later Shangpa master, Sangye Nyentön, was to receive these teachings much later from an Indian adept in Lhasa and brought them into the Shangpa tradition. According to Taranatha's "bka’ babs bdun ldan gyi brgyud pa’i rnam thar ngo mtshar rmad du byung ba rin po che’i khungs lta bu’i gtam" this Virupa was a student of the older Virupa.) Sukhasiddhi then offered her best beer and would not accept any payment. When Virupa learned of this he sent for Sukhasiddi and gave her the four complete empowerments for the yogic practices, as well as the secret practices of the generation and completion process meditations. She became a wisdom dakini just after receiving the empowerments. Through the power of her realizations her body was thoroughly purified and transformed into a rainbow body. Sukhasiddhi was one of the five root lamas of Khyungpo Naljor. She bestowed the four complete empowerments for the Uncommon Secret Practices, Six Doctrines' secret practices and the Three Fold Oral Instructions. Then Sukhasiddhi gave him all of the mother tantra instructions, which cause enlightenment in a matter of mere years or months. Among Khyungpo Naljor's root Lamas, the other four of whom were Niguma, Rahula, Maitripa and Vajrasanapa, Sukhasiddhi certainly was the kindest, said he. She promised to guide and protect all future lineage masters and followers, and indeed there are many instances in the biographies of later Shangpa masters in which she appeared to them in visions and gave guidance and profound instructions to them, some of which are included in the collected Shangpa texts (shangs chos). Such occurrences are indeed reported to the present day. The latest such visionary encounter, related to me (TSD) by my own root teacher Kyabje Tenga Rinpoche, occurred in the mid 1970s. Jamgön Kongtrul Lodrö Thaye has composed a brief but profound fulfillment supplication to her, on the request of one of his close students, the Tshabtsha Drubgen incarnation of his time (Karma Sang-ngak Tendzin Namgyal), which is included in his collected works. Another supplication to Sukhasiddhi, also by Kongtrul, is found in his collection of praises and supplications to the Shangpa lineage masters, the "rnam thar gsol 'debs udumba ra'i phreng ba", included in both the collected Shangpa texts (shangs chos) and the Dam Ngag Dzo (gdams ngag mdzod).

In Khyungpo Naljor's biography it is mentioned that she also taught a master called Aryadeva, and that he supposedly attained to the eighth level of awakening after practicing for only seven months. However, since we can place Sukhasiddhi approximately in the 10th century, it seems unlikely that this Aryadeva is the great 7th century Aryadeva who was a student of Nagarjuna.

Her legacy today consists of some unique Mahamudra instructions, the Three Nails, Oral instructions on the Wheel of Emanation at the Navel, and a collection of teachings known as the "Six Doctrines of Sukhasiddhi," a group of teachings somewhat similar to the more well known "Six Doctrines of Niguma" and "Six Doctrines of Naropa," however with some marked and interesting differences compared to its better known counterparts. While there is evidence that her teachings spread through several Tibetan lineages, we can read for instance in the biographies of Tsongkhapa Lobzang Dragpa that he received the cycle of Sukhasiddhi's teachings from Müchen Namkhe Naljor, it seems that nowadays these teachings and practices are maintained by the Shangpa Kagyu exclusively.

When the awareness dakini Sukhasiddhi received perfect empowerment into the emanated mandala from the glorious master, the great Virupa, she attained to the eighth stage of awakening in a single night. She truly beheld Vajradhara and became inseparable from the Bhagavani Nairatmya. In order to impart the essential instructions to fortunate disciples, she uttered this song:

Disengaging from the objects of the six senses,
To experience non-thought, is the path that leads beyond.
The expanse of ultimate reality is non-conceptual.
Mahamudra is devoid of mental activity.


Space is empty and non-conceptual!
The root of conceptual mind, cut off!
Cut off this root and then, relax!


Thus it was said.


Translated from the Tibetan by Sherab Drime (Thomas Roth)