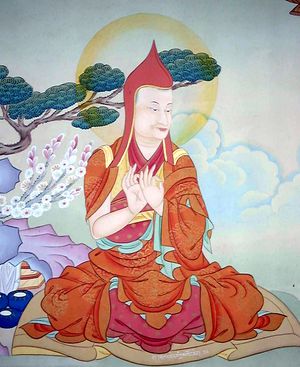 He was born in 1836 in the Dilchung region of Alo Shega county of Dokham, to his mother Lhadron and father Tsetra. From a very early age he always behaved in perfect accordance with the Vinaya and displayed natural compassion even as a child. At age eighteen he went to the Palpung monastery of the Tai Situ Rinpoches and met with Jamgön Kongtrul Lodrö Thaye, from whom he received lay vows and the name Tashi Ozer Lodro Gyepe De (bkra shis 'od zer blo gros rgyas pa'i sde). On that occasion he also received instructions on the three levels of commitments (sdom gsum), composed by Ngari Panchen Pema Wangyal (1487-1542), and on the Wish-fulfilling Treasury (yid bzhin mdzod) by Longchen Rabjam (1308-1363) from Kongtrul, as well as empowerments and explanations on various tantra cycles. At age twenty he received both rabjung and getshul ordination from Khenchen Dawa Sangpo, and the name Karma Sopa Rabten Palsangpo (karma bzod pa rab brtan dpal bzang po). He then continued his studies under Jamgon Kongtrul and learned all of Madhyamika, Prajnaparamita and Vinaya from him. He also received extensive teachings on the five cycles of teachings of Maitreya (byams chos skor). In particular, he was introduced to Mahamudra at that time. Not only did Tashi Ozer receive the entire transmissions of both the Karma Kagyu and Shangpa Kagyu lineages from Kongtrul and other masters, but also those of the Sakya, Zhalu, Bodong and Jonang. In particular, he received various streams of Kalacakra transmissions, along with instructions on this system's special set of perfection process meditations, the so-called Six Vajra Yogas.

At age twenty-four he entered into the lower retreat centre of Palpung and did the traditional three-year three-fortnight retreat under the guidance of the retreat master Karma Ngedon Nyingpo, a close student of Jamgon Kongtrul. After having completed the retreat he went to see the great bodhisattva Paltrul Rinpoche and received extensive instructions on Shantideva's Bodhicharyavatara from him. In particular, he received teachings on the wisdom chapter seven times. At age twenty-seven he again went into the presence of Khenchen Dawa Sangpo and received full monastic ordination. For several years he then continued his studies and received teachings from such outstanding masters as H.H. the 14th Karmapa Thegchog Dorje (1797-1867), the two Jamgons (Kongtrul and Khyentse), Terchen Chokgyur Lingpa(1829-1870), Khenchen Dawa Sangpo and others. There is not a subject of either sutra or tantra that he did not study under one of these masters. After Khenchen Dawa Sangpo had passed away, and upon the insistent advice of the two Jamgons, Tashi Ozer was then enthroned as the main Khenpo of Palpung monastery. He began extensive teaching activity and ordained large numbers of monks during his life. On various occasions he was graced by visions of Shakyamuni Buddha and Tara. In one of his visions of Shakyamuni Buddha he received from him the oral transmissions of various sutras. He was continuously engaged in the practice of both creation and perfection process meditations and his realization was boundless. There never was a time when he was not involved in either studying, teaching or practicing the holy dharma, and he was eventually closely involved in the upbringing and education of the 11th Tai Situpa Pema Wangchok Gyalpo (1886-1952). Having studied under some of the greatest masters of his time, he in turn became a teacher to several of the most illustrious masters of the late 19th and early 20th centuries of eastern Tibet.

In his old age Khenchen Tashi Ozer spent most of his time up in Jamgon Kongtrul's hermitage of Tsadra Rinchen Drak. He stayed there with his old friend Khedrub Tashi Chopel, another old and close student of Kongtrul's. They were famous for never keeping more provisions in Tsadra than what would last for a single day, in order to constantly remind themselves of impermanence. In 1910, after having fulfilled the length and purpose of his life, Khenchen Tashi Ozer dissolved his awareness into the dharmadhatu.

Homage to the Lama!

To obtain a human body is difficult, not to mention the pain of dying!
Since the time of death is uncertain, practice virtue without regrets!


In order to obtain a human body in the next life, do your mantra repetition
of the deity of Tibet. Continously repeat the six syllables!


The root of meditation, is mind looking at mind.
Not seeing anything whatsoever, just rest within this.


Nervously thinking of this and that, look at the very essence of thoughts.
When the recollection of what you observe vanishes, just rest within this.


When the terms of definition are gone, don't ask where they went and just look!
Without wondering how it happened, just rest within this.


Instead of looking into the darkness for long,
look for short periods but many times!


When eventually death occurs, and the outer breath is extinguished,
luminous emptiness arises. Be sure to recognize it at this moment!


At all times and in all circumstances, remember the great benefits of this life,
and always pray to be reborn in Sukhavati!

This was written for Tsabtsha Drubgen by Khenchen Tashi Ozer.
May it be auspicious!

This single page was given to me (Sherab Drime) by the late Kyabje Tenga Rinpoche in summer 2009, from the collection of his personal daily recitations. I translated it soon after that.