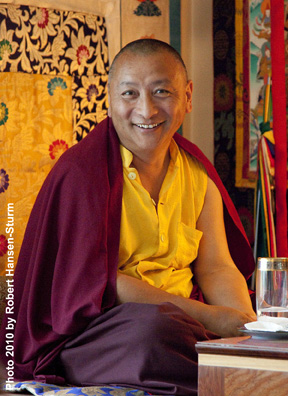 Born in 1949 in Kham, East Tibet, the Third Bardor Tulku Rinpoche (Tenpay Nyima) [1] was recognized as the third incarnation of Terchen Barway Dorje [2] (1836-1920) by is Holiness the 16th Gyalwang Karmapa [3] (1924-1981). When the political and social conditions in Tibet worsened as a result of the Communist occupation, Rinpoche and his family left the country for India. The arduous journey over the Himalayas and later the tropical climate of Assam brought death to all Rinpoche’s family, and the young Rinpoche found himself alone in a foreign country. He eventually traveled to Darjeeling where His Holiness the 16th Gyalwang Karmapa found him and arranged for him to be taken to Rumtek Monastery [4] in Sikkim.

Bardor Tulku Rinpoche underwent his training as a tulku (reincarnate lama) under the tutelage of the 16th Karmapa at Rumtek Monastery. He remained close to His Holiness throughout his life, serving as his attendant and traveling with him overseas. At His Holiness’s request, he stayed in the United States to help Khenpo Karthar Rinpoche [5] and Mr. Tenzin Chonyi [6] establish the Karmapa’s Seat in North America, Karma Triyana Dharmachakra [7]. Rinpoche started teaching in the West in 1980s. He has taught at KTD and its affiliates, at other Buddhist centers in the United States and abroad, as well lectured at universities and other venues. Some of his teachings have been published as books and DVDs.

In the fall of 2008, Bardor Tulku Rinpoche resigned from his responsibilities at KTD and is now focusing fully on the activities of Kunzang Palchen Ling. In addition to providing access to the teachings of Tibetan Buddhism in general, the center also serves as a venue for the preservation of the treasure (terma) teachings of Terchen Barway Dorje and the teachings of the Barom Kagyu lineage. In addition to overseeing translations of Terchen Barway Dorje's termas into English, Bardor Tulku Rinpoche himself composes liturgies and songs (dohas). [10]. Rinpoche also guides the activities of Palchen Study Groups in the U.S.

Bardor Tulku Rinpoche travels and teaches across the U.S. His teaching schedule can be found on the KPL website.[11].