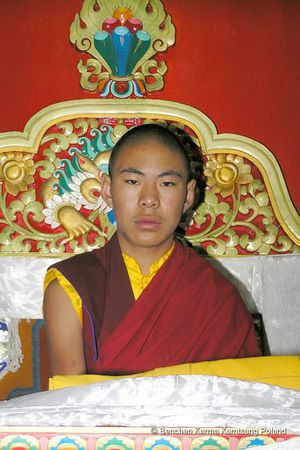 A very brief history of the Benchen Chime Tulku Rinpoches

The first of these masters, who eventually became known as the Benchen Chime Tulku, appeared at the time of the 7th Sangye Nyenpa Rinpoche Sherab Nyingpo. He was either a brother or nephew of Sangye Nyenpa Rinpoche, and his subsequent incarnation was thus also known as Öntrul Chime Rinpoche, which signifies a family relationship of the first Benchen Chime Rinpoche with the then Sangye Nyenpa. From an early age, he studied under the 9th Tai Situpa Pema Nyinje, whom he considered his root lama. From him he received the entire transmission of the teachings and practices of the Karma Kagyu, like a vase filled to the brim. Having received all these, he proceeded to practice all of these teachings intensively, until clear signs of realisation arose unmistakenly. In the presence of H.H. the 14th Karmapa Tekchog Dorje he received both novice as well as full monastic ordination. At that time he also received the transmission of the teachings and practices of Guru Padmasambhava according to the terma tradition of Guru Chöwang. He also learned all the corresponding rituals and dances to perfection. The performance of these, is continued in the Benchen monasteries in Tibet and Nepal to the present day. At the conclusion of this transmission, the Karmapa presented him with a statue of Guru Padmasambhava made of precious Li-metal, and a nine-pronged vajra made from Zi-stone. Both of these items were kept in the treasure-chests at Benchen monastery. After Chime Rinpoche had fulfilled the purpose of his life for the benefit of beings, he passed away into nirvana.

The second Benchen Chime Rinpoche was found in accordance with H.H. the 15th Karmapa Kakhyab Dorje's prophesy. He was born into the Behu Tshang family. Already at an early age he clearly demonstrated his weariness with and renunciation of worldly life. The 8th Sangye Nyenpa Rinpoche Drubgyü Tendar became his root teacher. True to the non-sectarian ideal of the Rime movement, he also studied under a great number of masters of all traditions. In particular, he erected the victory banner of the practice tradition of the Karma Kamtsang. Since the records of the lives of the previous Benchen masters were lost during the time of the great upheavals, not much is known about his life, except that he spent much time in seclusion in order to perfect his meditative practice for the sake and welfare of beings. After his life had run its course and he had fulfilled his intended purpose, he passed away.

The third Benchen Chime Tulku was found in accordance with the 11th Tai Situpa Pema Wangchok Gyalpo's prophesy and examination. He was born into the Norma Tshang family of Nangchen. At age eight he was brought to Benchen monastery and installed upon the golden throne of his predecessor. He offered his hair, i.e. he took refuge, to the 9th Sangye Nyenpa Rinpoche Geleg Drubpe Nyima, and took him as his root master. From him he also received the empowerment and teachings of White Tara, which was his surpreme meditation deity. He proceeded to study closely under his tutor Lama Karma Tashi, under whose guidance he perfected both learning as well as realisation in practice. This was around the time when H.H the present 14th Dalai Lama Tendzin Gyatso, H.H. the 16th Karmapa Rangjung Rigpe Dorje, H.H. the Sakya Tridzin and many of the greatest masters of Tibet were returning from their journey to China. Chime Rinpoche, together with Sangye Nyenpa Rinpoche, then travelled to the great monastery of Palpung, the seat of the Tai Situ Rinpoches in Derge, to behold the golden face of the Karmapa for the first time. At that occasion he was fortunate to receive novice ordination. From the 2nd Jamgön Kongtrul Palden Khyentse Öser, aka Karsey Kongtrul, he received the transmission of the famous collection of terma literature known as the Rinchen Terdzö. This took place at the Surmang Namgyal Tse monastery, one of the seats of the Trungpa Rinpoches. During the time of the great upheavals, Chime Rinpoche was forced to spend many years in Siling. Eventually he was allowed to return to his monastery where he met again with some of the old Benchen lamas such as Lama Ado, Lama Könchog and others. They strongly resolved to rekindle the dying flames of the teachings of the Buddha at Benchen. He dedicated his final years to the reconstruction of Benchen monastery and conducted many ceremonies for the benefit of beings. Chime Rinpoche was instrumental in the re-establishment of the monastic sangha at Benchen and accepted many students, who slowly began to return to Benchen. Having fulfilled the length and purpose of his life, he passed away.

The present fourth Benchen Chime Tulku was found in accordance with the prophesy of the present 12th Tai Situpa Pema Dönyö Nyinje. He was born in 1991 as the son of Jamyang Khechog, one of the officials of Surmang Namgyal Tse monastery. He was brought to Benchen monastery and enthroned upon the seat of his predecessor. Under his tutor Karma Gyatso he learned reading and writing. Presently Chime Tulku studies thoroughly in the shedra, or monastic university, of Dülmo Chöje Rinpoche, who is the authentic incarnation of the 1st Karmapa Düsum Khyenpa's disciple Batsha Tagdel, who was famous for his complete mastery of subtle winds and energies. Thus, in the tradition of his predecessors, Benchen Chime Tulku Rinpoche is once again active for the benefit and welfare of sentient beings.

Translated from the Tibetan by Sherab Drime [TSD].