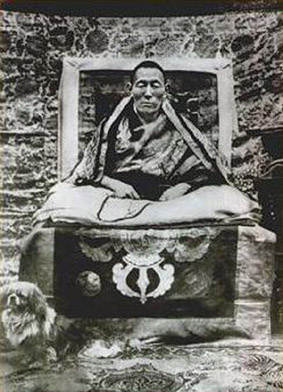 Karsey Kongtrul (kar sras kong sprul) (1904-1953), alias Jamgön Palden Khyentse Özer ('jam dbyangs mkhyen brtse'i 'od zer), the immediate reincarnation of Old Kongtrul, reborn as the son of the 15th Karmapa, Khakhyab Dorje who identified and enthroned him (age twelve), in 1902, in Samdrub Choling at Dowolung Tsurphu. He resided at Tsadra Rinchen Drak, the seat of his predecessor in eastern Tibet. He received the full education and lineage transmission from the Karmapa. Among his other teachers were Zurmang Trungpa Chökyi Nyinche. He attained realization of the ultimate lineage, was one of the most renowned Mahamudra masters and transmitted the innermost teachings to the 16th Karmapa, Rangjung Rigpe Dorje. Many times over, he gave teachings, empowerments, and reading transmissions from the old and new traditions, such as the Rinchen Terdzö, and he rebuilt the retreat center of Tsadra Rinchen Drak (his residence above Palpung Monastery. He passed away on the tenth of May, 1952. He passed away in his forty-ninth year.

The Second Jamgon Kongtrul, Khyentse Euser (1904-1953) was born at Tsurphu Monastery as the son of the fifteenth Karmapa, Khakyab Dorje, who identified and enthroned him. He received all the Kagyu teachings from his father. The young reincarnation travelled to Tsadra Rinchen Drag, the seat of his predecessor in Eastern Tibet. He studied extensively with many masters such as Zurmang Trungpa Chokyi Nyinche and others. He travelled and taught in many places in Tibet and is known to have stressed his personal meditation practice to a great extent. He transmitted the innermost teachings to the sixteenth Karmapa, Rangjung Rigpai Dorje. Thus he became a lineage holder of the Golden Kagyu Lineage. He passed away in his forty-ninth year.