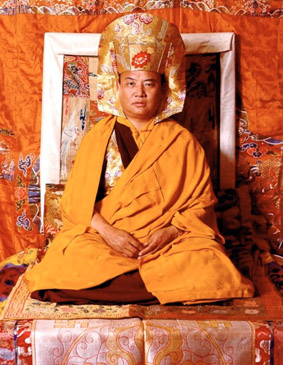 Rangjung Rigpai Dorje was born in Denkhok in the Derge province of Eastern Tibet.

His predecessor's personal attendant, Jampal Tsultrim, had been entrusted with the letter that indicated the sixteenth reincarnation's birthplace, parents and so on. Jampal Tsultrim gave this letter to the administration of Tsurphu Monastery. They asked Beru Khyentse, Situpa and Jamgon for clarification concerning some unclear points. A search-party was sent out and the reincarnation was found.

The young Karmapa was brought to Palpung Monastery where he received teachings from Situ Pema Wangchok. He also received ordination and the bodhisattva vow from him. He received teachings on Tantra from Beru Khyentse Lodro Mizay Jampa'i Gocha. He studied the sutras with Bo Kangkar Rinpoche. Jamgon Palden Khyentse Euser taught him the Six Yogas of Naropa and Mahamudra. Situ Pema Wangchok and Jamgon Palden Khyentse Euser were the main gurus of the Karmapa.

He travelled and taught throughout Tibet. From 1950 onwards the Chinese Military took control of Tibet. The Dalai Lama and government officials went to Beijing for talks. H.H. the sixteenth Karmapa and many other great lamas accompanied them to participate in the discussions. The talks brought about some good results for the Tibetan people. However, in 1959 the Chinese annexed Tibet at which point the Karmapa fled to India.

He settled in Sikkim. The king, Tashi Namgyal, offered land where the Karmapa constructed Rumtek Monastery. He also went to Bhutan at the invitation of the king, Jigme Dorje Wangchuk. He travelled to Ladakh, where he gave teachings at different monasteries after which he went on pilgrimage to the holy sites of India and Nepal.

In 1974 he went abroad for the first time. Dharma centers were established throughout the world. He spread the Buddhist teachings and had a large number of followers. Karmapa Rangjung Rigpai Dorje passed away in his fifty-eighth year.