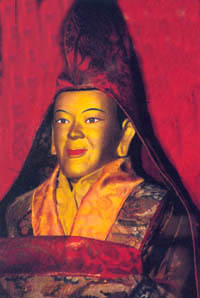 A statue of Bodong Panchen which is said to have spoken on various occasions.

He is very often confused with the somewhat earlier Jonang Chogle Namgyal (jo nang phyogs las rnam rgyal, 1306-1386). Bodong Panchen Chogle Namgyal, a contemporary of the Mahasiddha Thangtong Gyalpo, was born in the south-western Tibetan region of Yigu and went on to become one of Tibet's most learned and realized masters as well as a most prolific writer. His collected works are in no less than 137 volumes. However, to be fair it has to be added that this corpus of literature includes his personal library as well. Not all, even though many, of these volumes were composed by him. At age seven he received novice ordination from his uncle Lochen Drakpa Gyaltsen in Bodong E monastery and was named Chökyi Gyaltsen. Staying at Bodon E until age sixteen, he studied the traditional ten fields of knowledge there and excelled in all of them. Already at such young an age he was considered an eminent scholar. He then went on a tour of Sakya and other monasteries for teachings and debates. Most older scholar at these monasteries were deeply impressed with the young man's knowledge and understanding as well as his skills in debate and composition. By age twenty one he had fully comprehended the entire range and depth of the Buddha's teachings. So much so that his uncle named him "Young Pandita", stressing that he had mastered the whole of the doctrine through his own insight, without the help of a teacher. Chogle Namgyal successfully debated and defeated all the famous great scholars of his time, such as Yak Mipham (1350-1414), Rongtön Sheja Kunrig (1367-1449) and Lobpön Gelek Palsang (1385-1438). It was around that time that he was given the names "Chogle Namgyal" and "Jigme Drakpa." Later, after he had assumed the abbacy of Bodong E monastery, that name was appended to his personal name and he was henceforth called Bodong Panchen Chogle Namgyal. At age twenty three he then received full monastic ordination at Shelkar monastery, again from his uncle Lochen Drakpa Gyaltsen, who acted as the abbot, and Jetsün Rendawa and Lama Samrinpa, who acted as instructor and preceptor. At age twenty six he ascended the throne of Bodong E and became it's abbot. Owing to his unparalleded fame as a scholar, he was invited by the then rulers of Tibet, Wang Drakpa Gyaltsen (1374-1432) and Wang Drakpa Jungne (1414-1445) and many other regional lords such as Trigyal Sönam De (1371-1404) and Tri Lhawang Gyaltsen (1404-1464) of Gungthang, as well as the lords of Northern and Southern Latö, and the masters of Nakartse, Rinpung and Taklung. Many monasteries invited him as well and he did numerous tours of teaching in these places. But he was not only a scholar. In his spare time he practiced intensely and gained realizations quickly. As of then, he beheld many deities in visions, and eventually Vajrayogini and Vajrasattva requested him to compose his most famous works, the four "de nyid 'dus pa" collections. They make up a sizable part of the above-mentioned 137 volumes. He also, at age sixteen, had visions of the awareness dakinis Niguma and Sukhasiddhi, most often associated with the Shangpa Kagyu tradition, and received from them their special longevity practices in these visionary encounters. As evidenced by quite a number of short but pithy commentaries on various Shangpa practices, and also some fairly lengthy ones, he seems to have received the transmission of this lineage, though it is not clear from whom. This material seems either to have been mostly ignored by mainstream Shangpa masters, or it was simply unavailable and unknown to them. In 1410 Chogle Namgyal established his own monastic seat of Palmo Chöding, near the Palgu lake in the Porong region. He spent most of his remaining life there. His teaching tradition became an independent school for a few generations, the Bodongpa, and was later assimilated into the Sakya and Gelugpa schools. While he had many great scholar and practitioner disciples, the foremost, and possibly most famous one among them was Chökyi Drönma (chos kyi sgron ma, 1422-1455/6), a princess of the Gungthang court, who went on to originate one of the very few, and certainly the most well-known, female incarnation lineages of Tibet, known as Samding Dorje Phagmo (bsams sdings rdo rje phag mo). After Chogle Namgyal's death, she went on to become a student, and presumably consort, of the Mahasiddha Thangtong Gyalpo. [TSD]